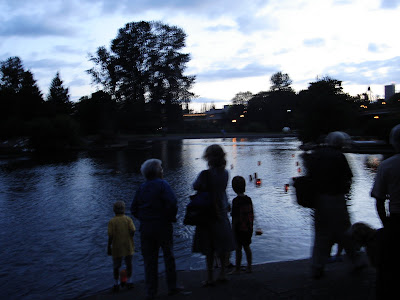 Today marks the 62nd anniversary of the dropping of the atomic bomb on Hiroshima in Japan.

Japan has so far recognised the total number of victims who died of radiation illness and injuries in Hiroshima as 253,008 and in Nagasaki as 143,124.

Our local community held it's annual memorial, to those who lost their lives, and to vow to work so that this never happens again. The truth of the matter is nuclear proliferation is still occurring, with more countries amassing nukes, and previous agreements and treaties have been broken by the U.S. Government, so other countries like Russia, Korea, and perhaps Iran, have a kind of "if you can have them so can we" approach to nuclear weapon build ups. It IS bizarre that the U.S. has embraced the philosophy that because we are "good", we can have whatever weapons we want, but we have the authority to dictate to other countries what weaponry they can or can't have, because they are "evil".
I won't even expound on the good nukes/bad nukes mindset other than to acknowledge it's sheer insanity. 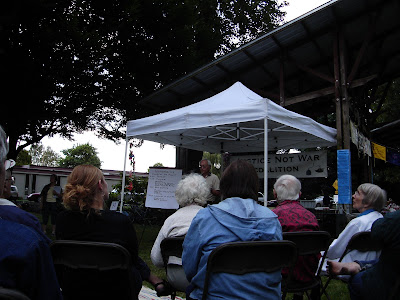 The keynote speaker, Bob Watada, father of Ehren Watada, the soldier at Ft. Lewis WA, who refused to deploy to Iraq, because of his pledge to defend the Constitution, against all enemies foreign & domestic- declared the Iraq war an illegal and immoral act, which he refused to participate in.
Mr. Watada spoke of learning about Barbarians in school. In Northern Europe they became known as the Teutons, Norse, Goths, and Celts. Quickly displacing or assimilating the indigenous people of the regions they entered, they never truly settled anywhere, ever-moving as their needs and resources changed. They wanted the gold and valuable resources of the places they attacked.

The only thing that has changed in the ruthless, rape and pillage the barbarians engaged in, are the "spoils" they seek. Perhaps then, it was land and gold, now it is oil. He came to the conclusion that Barbarian acts have continued into the 21st Century.

So as we commemorated the loss of so many lives in the only nuclear bomb attacks in history in the 20th Century, we also realize it is not just nuclear weapons that are so Barbaric, but the current practices of the occupation of Iraq are equally Barbaric.

As for his son's trial with the Military, he likened it to the Witch Hunts of Salem. Where juries were ordered to go back to the deliberations room until they came back with a "guilty" verdict. The trial of Ehren Watada was under way. A jury selected, testimony given, when the judge declared it a Mistrial- thereby creating double jeopardy, voiding the case. The double jeopardy appeal is pending. Ehren is in good spirits. He knows he is doing the right thing, and that keeps him going.
Ehren Watada is a Soldier of Conscience. The gathering closed with floating luminarias on the waterway. The images have a ghostly ambiance... perhaps a reminder we should be haunted by mistakes of the past & present? 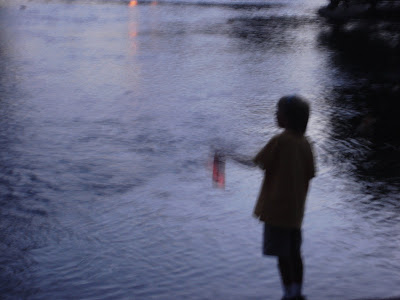 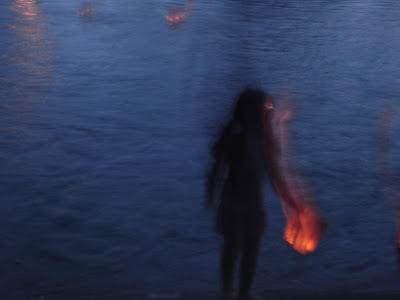