The Monks of Drepung Loseling Phukhang Monastery, visiting from South India, will build a traditional Tibetan Buddhist Sand Mandala at the Downtown Eugene Public Library over the course of three days.

The public is also invited to watch the process at any time on Friday, Saturday, and Sunday, when the Downtown Library is open from 10:00 a.m. to 6:00 p.m. The ancient art of creating Sand Mandalas is meant to inspire compassion and bring progress towards world peace. According to the monks, “it is said that wherever a Sand Mandala is created, all sentient beings and the surrounding environment are blessed, and that whoever views the mandala experiences profound peace and great joy. The colorfulness and harmony of the millions of sand particles in the mandala gives a powerful message that we all can live in peace if each of us work in creating a little more space for others in our hearts.”

The Opening Ceremony will consecrate the site with approximately 30 minutes of chanting, music, and mantra recitation. Then the monks will begin the exacting work of drawing the lines for the design of the mandala. Throughout the following days, the monks will skillfully pour millions of grains of brightly-colored sand from a funnel-shaped metal tool known as a “Chakpur,” creating an astonishingly detailed work of art. During the Closing Ceremony, the monks will dismantle the Mandala, sweeping up the colored sand “to symbolize the impermanence of all phenomena, teaching that everything that exists has a beginning, a middle and an end.”

Ironically, I just quit a job that paid a substandard wage, but they always hit us up to "give generously" to charity.  They even made this big push for United Way (top heavy in the amount taken for administrative costs)- during a year long WAGE FREEZE.
I always thought, I'd love to -- & will do so right after you pay a decent wage so I could afford to give.
Now I have a new job. My employer is not hounding me for donations, and all by myself, I decided this year I can do some donating (thank you new employer for paying me a living wage).
Request envelopes came from the Food Bank & Red Cross.

They do good work & the need is great (despite the media telling us the numbers are looking better).... I'm saying yes. I'm not going to be in the Big Donors Circle, but if everyone could throw whatever they can afford to such charities, what a difference that would make.
For instance the population in Eugene, Oregon is 156,929. Even if everyone gave a buck, that would be a chunk of change. Even $2 bucks each would equal $313,858 dollars.

So I'm encouraging us all to give whatever we can- because even small amounts add up. If cash is tight, you can donate your time, or blood.
So many good organizations are in need- be it the local animal shelter, soup kitchen, Vet support, Food Bank, whatever. Just do it. Feels great!


An Open Letter to President Obama

Love that he calls BS on the fiscal cliff.
Love the demand to cut the wars & covert actions & drone bomb dropping.
I particularly love the go after Wall Street like you do medical marijuana dispensaries remark.
The deep debt students are enduring-- is preventing may students from even going to college at all.
President Obama can;t be President for more than 2 terms.
No more worries about potential future reelections.
Time to roll up the sleeves & be the change we wish to see in the world.

Sleep in. Relax. Hold hands. Visit nature. Meditate.
Contact someone who may need a companion.
Make a donation to the Red Cross or the local Food Bank or Shelter.

Hostess is serving up lies 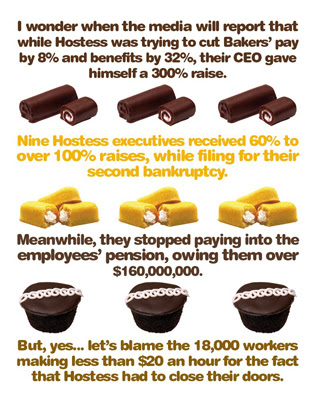 Turns out the truth is less sweet than the myth they tried to serve the media.
Looks like the Execs were taking more than a baker's dozen, cash wise, and thought they could give FOX newzzz types a cake walk, blaming the workers for being greedy "takers", with their hands in the cookie jar, or Ho Ho box , if you will.
Now they are in a Twinkie mediation, trying to pull the business of mysterious confections out of the bankruptcy fire/oven.
I seriously doubt anyone thought there was nutritional value in the Hostess product line,  but the reason they have such a long shelf life is some of the chemical magic in the ingredients.
Mmmmmm polysorbate 60, Trans fats & high fructose corn syrup.

Much ado about this:

And! Good Nutrition they need!

No rest for the weary

It's already started-- Who will run in 2016???
I'm fine with that happening behind the scenes. It's not about just winning the race, it's about doing the job you are elected to do. Focus! Have you ever heard an American say they look forward to the campaigning in election years?
Posted by Fran at 12:00 AM No comments:

Effing Game Day to the Max!!! 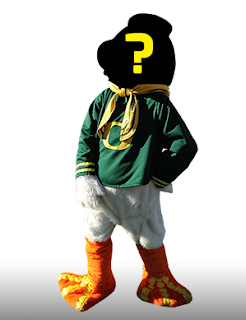 Because there is simply not enough hype about sports & football @ the University of Oregon.  ESPN is having a "Game Day" event. 7 semi trucks to run the game day broadcast, 60 staff people from ESPN, people are going to camp out overnight to be 1st in line for the super hyped up event-- but here is the kicker-- as a publicity stunt, they had the Duck Mascot sky dive... & the duck lost it's head on the way down! 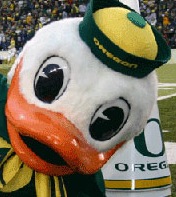 Chris Fowler
@cbfowler
BREAKING NEWS; The ORE Duck head is missing. While skydiving today, it came loose & plummeted to earth. A search is ongoing. No joke.

Puddles, the Oregon Duck, has lost his head. Puddles was skydiving with for a College Game Day segment when his head came off mid-jump. As you can see from Chris Fowler’s tweet, it was lost somewhere in Oregon. While the Duck has two more heads (this was the “third string” head according to Fowler), this must have been seen as a bad omen with a game against #13 Stanford looming tomorrow night.

The mascot head was found in a nearby town by a "good Samaritan"- wow!
Returning a mascot head is now a heroic act, and or "breaking news"!
Want to watch the news? All about Game Day!
Want the weather report? It's the Game day weather report!
People are flocking to the book store to get--- you guessed it- Game Day trinkets!
All this over the top hype is ridiculous-- it is not just "Puddles the Duck" who lost his head.
This is like the Lorax story, College Football version.