I can't use it anymore 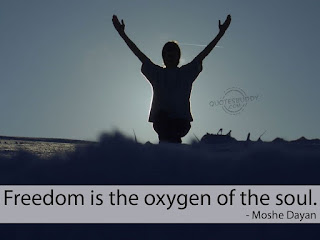 What better day than Halloween than to turn in my resignation @ my job of 7 years. The oppression & conditions there became unbearable.
I am a human, not a robot.

Today I resigned from the corporate world & will now work in the field of Social Services.

I realize there will be demands & difficulties there, (i.e it may not be "heaven"), but at least, at the end of the day, I will know that I spent my work day providing helpful services.

So today I literally did-  take this badge off of me, I can't use it anymore. 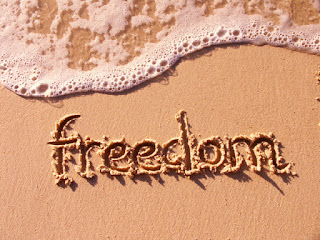 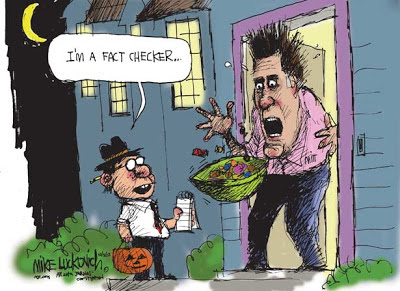 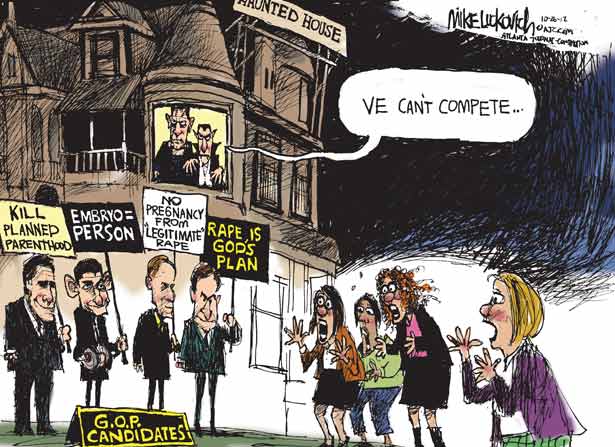 A special shout out to those on the East Coast dealing with the "Frankenstorm"... hope you are safe & keeping up your spirits. This could be a long haul waiting for power to be restored.
Thinking good thoughts for you, hope you are staying strong & helping each other out through this tough time.

Click here is a link w suggestions of how to keep your cell phone charged longer during the power outage. 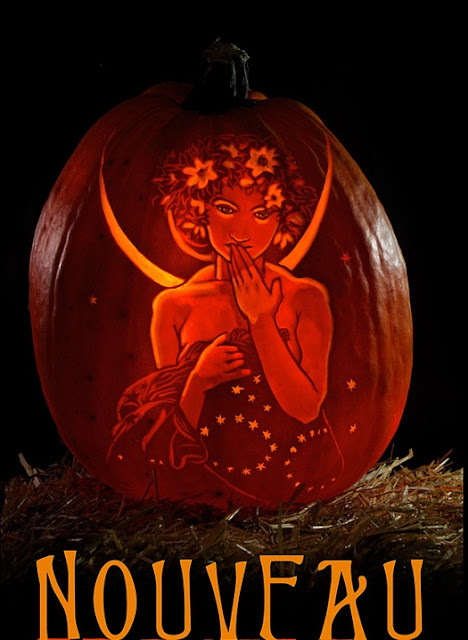 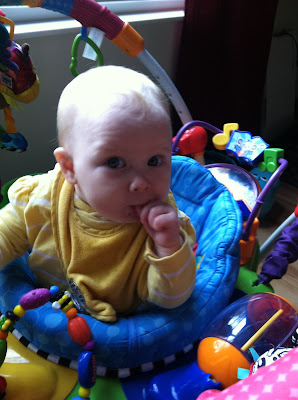 Just got back from a week long visit to see & meet the "best grand baby evah". She is a sweet cherub who has won our hearts. So when it comes time to vote in this upcoming election, I also think about her & how this election effects her life. I know there is no perfect candidate out there, and I know the system is broken at best. But I also know I want her & others to have funded public education. I want her to have a balanced supreme court. I want all people to have access to the medical care they need. Civil rights, equal rights, and yes, already- I want the rich to pay a fair share of taxes- especially the commander in chief, who should be setting a good example. Stashing all your money in foreign accounts to evade paying taxes, in general is not OK, but while the USA is financially struggling is a "patriotic fail". To me, actions speak more than words-- Mitt cares about the US, but the caring ends when it comes to his personal financial gain.
But back to the list of things I want my grand baby to have-- clean water & air, a leader who will not trash the planet with reckless resource extraction, and failure to think ahead or think about environmental
stewardship. Once the strip mining, fracking, & oil spilling happen, it's awful hard to get the genie back into the bottle to fix it.

The State of Oregon votes by mail only. I have the ballot in my hot hands, and I am ready to cast my votes.
Of course I think about my needs & the fact I do not want the age of retirement to be 70 or 80 something (Mitt's way to save some bucks), & I don't want the government making  reproductive choices for me or the grand baby. I want Planned Parenthood fully funded, and I think Big Bird & Sesame Street are a good long term investment (educational programming- free to the public).
For many reasons, voting against Mitt Romney makes so much sense. 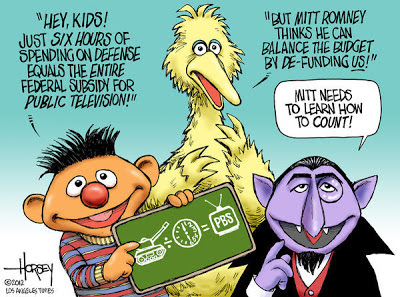 The Postal Situation- Return to Sender 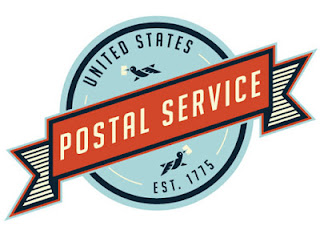 It has been widely known the retirement pre funding mandate is the biggest line item that is pushing the Postal Service into financial ruin, but also with the Internet & fax capability, communications & documents can be moved in a matter of seconds, rather than land based snail mail.
Actually, the pre-funding requirement that was added as an amendment to a 2006 law is as follows:
Congressional role
"Of related significance is the Postal Accountability and Enhancement Act of 2006 (PAEA), which obligates the USPS to prefund 75 years' worth of future health care benefit payments to retirees within a ten-year time span – a requirement to which no other government organization is subject. Thus, in addition to the weak economy and the diversion of mail to electronic means, the mandates of PAEA have had a considerable impact on Postal Service finances. As a consequence, it has been charged that the US Postal Service budget crisis of 2011 is, in essence, an artificial crisis." -NBC NEWS
Congress also has the ability to affect the USPS budget by changing rates for postage.
Why does no other government agency or private company have to struggle under this burden?? Could it be that some people want to force USPS out of business?? (Ask Felon Tom Delay).
The postal service is raising the rate of a stamp by one cent in Jan of 2013.
I read a bunch of comments, lots of people had their panties in a knot over the penny increase--but seriously-- have you looked at the cost of gas lately? I doubt the penny increase even covers that cost spike. The new "forever stamp" format means you can use the old stamps w/o additional postage... forever.  So you can stock up prior to the rate hike if the additional penny per letter is a hardship.

For years, I have advocated for the elimination of the Saturday delivery day. Our neighbors to the north, Canada have been doing 5 day a week delivery since Feb 1, 1969. So we are 43 years behind the times, in that regard.

One of this country's problems is letting issue like this continue to circle the drain, and the more years that goes on, the more billions in the red the Postal Service suffers.
Come on! When we hit personal financial hard times, we make decisions to alleviate the problem early on. You have a high interest credit card & too much debt- you see about getting into a lower interest rate & get the balance paid down faster. You have less cash flow, you make less expensive choices. If Congress enacted funky mandates that are a choke hold on the USPS, have them fix it.  5 day a week delivery is not a huge hardship & would save $3.5 BILLION per year.
The sticky wicket, is this:
"The U.S. Postal Service receives its mandate and its funding from Congress through a Financial Services Appropriations bill. It is the will of the House of Representatives and Senate, through the appropriations process that mail be delivered six days a week."

Congress needs to *do something*. Roll back the 75 year pension mandate and or cut one day of delivery.
Doing nothing is not really cutting it, and if history repeats itself, the Party of NO (GOP), would likely throw in some other tax cut for the rich & vote in lockstep unless they get it.

The whole situation is out of control, and they longer nothing is done, the deeper the financial hole. 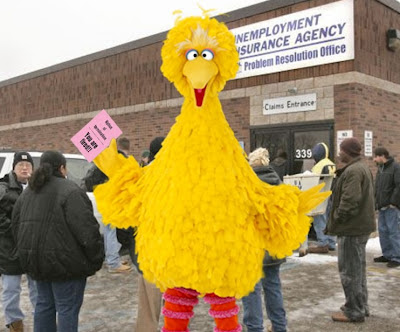 Mitt Willard Romney is quite a piece of work. The man is flip flopping so much it is hard to keep track of what his stance-of-the-week might be.
When the real Mitt was captured saying his 47% victim remark, including the slap in the face statement "My job is not to worry about those people" -- Mitt stood his ground & said although "not elegantly stated," he stood by what he said. He was not backing down.
Until he did back down, last week, saying he was"completely wrong".
I finally reached common ground with Romney!  Not only was his statement wrong-- but his entire platform of no/yes doublespeak on just about every issue makes him completely wrong. For the record-- I'd rather Pink slip military spending & let Big Bird keep job.

I will say the NY Daily news headline stated it best- "Mitt hits the fan". Even staunch republicans were rumbling that the comment & lack of retraction and or apology made Mitt (appear as) "arrogant and stupid". All along we have heard the biggest struggle in the Romney sales pitch is for him to come across as human.
How many of us have that problem? 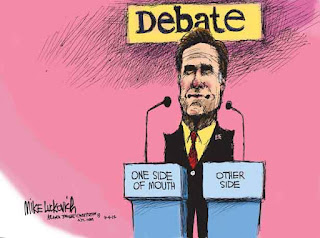 There is a real core issue & heart of the matter-- that no matter how much they try to make him smile, or come across as a man of substance-- but ony enough to have his opinions match that of whichever way the winds blow that day, and or what the big money donors/handlers want  his campaign message to be.
The truth of the matter is Mitt would fire Big Bird. He does hold those using entitlement programs in contempt, and he will gut those lifeline social service programs-- because he is not just a 1%er, but the top 1% of the 1%ers  Mitt does not see the need, or have a heart about those who are drowning in health care costs, or have rightfully earned their entitlement monies.
When he says those words we want to hear-- about education being important... he throws in "freedom of choice" and almost whispers the word "vouchers".
Yes, Mitt does not get it, that taking Federal Money out of the public schools, so that kids can have vouchers- to use federal money to attend private schools (read private Mormon & religious based schools) that he would deal a sucker punch to the already struggling public school system.
Never mind the fact public/religious neutral schools are all inclusive & provide diversity & equal opportunities-- I'd love to see what Mitt would say if a kid wants to use a voucher to attend a Muslim* based private school, for instance. I bet Mitt would have his panties in a knot.  Suddenly, there would be a whole walk back of this freedom/voucher concept- for certain schools or religions.

* Apologies in advance to peace loving Muslims everywhere, I an just making a point that Romney would like vouchers for religious private schools, but only approved religions.

Therein lies the problem- Mitt stands for what he stands for, until he does not, and he's done a whole lot of changing. Don't get me wrong- some change is good-- like Obama finally getting rid of don't ask don't tell. I would not be comfortable w a leader who remained hopelessly fixed on matters so as to not progress in positive ways-- but we are talking about total turn arounds. 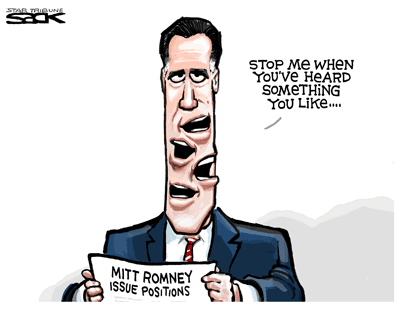 In closing, most of us are in the 99%, or the 47%, or know or have loved ones, friends & family that are in that category. I think what Mitt said was the real Mitt, and his issue positions shift more than the sands of dunes on a windswept beach. It's not new that politicians tell us anything we want to hear, in order to get elected-- but Mitt's everchanging positions are as out there as his money is spread about in foreign accounts. Maybe we should call him "Gyro"?
Whatever we call Mitt Romney, it should not be "president".