I was trying to find this theme song & came across this well done peak oil clip. The $2.85 gas rate shown in the clip was from "the good old days". I just paid $3.19 a gallon for regular today & saw diesel for $3.69 a gallon. Mass media says to expect $4 a gallon gas in the next few months. Our Mission, should we choose to accept it is to follow the money. 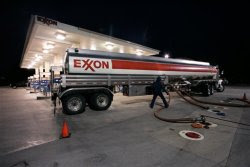 Shell's revenues of $318.8 billion in 2006 made it the third-largest corporation in the world by revenues behind only ExxonMobil and Wal-Mart. Its 2006 gross profits of $26 billion made it the world's second most profitable company, after ExxonMobil and before BP. My point is someone is making crazy amounts of money, while others are taking it in the shorts.

The real challenge in my own life, is to try to drive less, and even not at all, for most everyday living. Use far less gas than I ever have. That would mean that trips like I am on, will not be taken. That means that I walk, bike or use public transportation to get around.

But I live in the country, miles from town. There is no bus. I can't walk, it's too far. I'd bike, but it is winter and there is snow and ice and it is a dangerous stretch of road to negotiate.

my only realoption is to move to town and get a place where i can walk easily. Buy things that are made or grown locally, (saves on shipping fuel cost), and make more from scratch, (less packaging and processing energy use.)

But we all can't live in cities. People will absorb this price hike and in a year, we'll all think that $3.75.9 is a low price.

use less, change your lifestyle if you dare, don't buy it, they don't make money.

35-40 mpg is really good mileage- in the US under the circumstances. The vehicle is here to stay. It is not practical to think everyone can live in a city that has busses. We live in a city that has busses, but for example, my 19 year old son works as a security guard on swing shift, and no busses run to the outskirts where he works after 8 pm & he gets off work @ 10. When he does take the bus, it takes about 2 hours as he has to go to the main station & transfer- versus a 12 minute drive (one way). Big difference. One friend converted her bike with an electric motor, so she can do 20-30 miles a day on the bike w ease.
Cost about $1000. I told my kiddo he will need to put together his own transportation, and he does not want to buy a combustible engine motor.
Too bad electric cars are either pretty spendy $10K & up & some just look real flimsy to me.

The US really dropped the ball in terms of being environmentally responsible- even just requiring auto manufacturers to have a 30+ mpg minimum.
I see so many new vehicles in the Saturday auto section getting under 20 mpg! There is no excuse for that- other than the Government lets them because maybe just maybe they profit on the sale of oil? It's not an endless reserve, and one way or another, we will have to do better. Thankfully people are voting with their dollars, and doing a lot of the things you mentioned.

Spado you have really good mileage...wow...I need me a Focus...

that is the way of it...sometimes I don't mind...
I purposefully moved near a grocery store - thinking that I could walk and use less gas- the last three moves I have tried to uphold that policy...

Good for you Enigma! Literally walking the walk.
Not so sure about the Focus-- they have been the most recalled car- ever. You might do better w a Toyota. The husband's 98 Corolla gets 41.8 mpg.
Wish the electric car offerings were up & running.
Most people don;t go more than 30-50 miles per day, and for them electric could be a great option.
Someone told me they banned them in California- deeming them not profitable- the people who had leased them loved them- were not allowed to purchase them after the lease was up. they actually crushed the vehicles, rather them allow them to be purchased.

There is a 2006 documentary film called *Who killed the Electric car?* Here is a link to a description in Wickipedia:

Yes, the oil tycoons & lobbies were behind the demise.