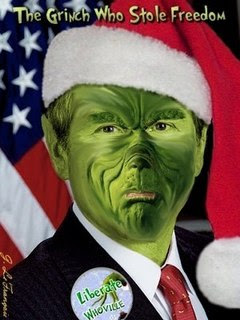 HOW THE SHRUB SCREWED CHRISTMAS: NOT
Based on HOW THE GRINCH STOLE CHRISTMAS
by DOCTOR SEUSS ( AKA Theodor Geisel)
Parody Version by BibleBelted, PraetorOne, Matthew5, and DoctorWho

This parody was just too good & had to be shared.
I love Dr.. Seuss and the stories he told
Listening to them, they will never get old
Dr. Seuss told stories that made us ponder
brought our minds to reason & beyonder.
Dr. Seuss was the one
Who made activism so much fun! ~Fran

I'm posting exerpts (it's really long), but you can read the entire piece Here:
http://sirenschronicles.com/2007/12/02/how-the-shrub-screwed-christmas-not/#more-790
Thank you Sirens Chronicles for posting this post
It's the grinchiest best, cherished by most.


Every Blue
Up in Blue-ville
Loved Christmas a lot
But the Shrub
Who lived South of Blue-ville
Did NOT
The Shrub hated Christmas; and this was a reason
He hated the joy and the whole peaceful season.
It could be perhaps he loved pain and the fright
Or maybe his brain wasn’t working quite right
But I believe that the most likely reason of all
May have been that his conscience was no conscience at all.

But whatever the reason
The soul or his brain
He cursed through December, raising all kinds of Cain
Glaring up from DC with a mean Bushy smirk
He proved to the people that the Shrub was a jerk
Yes he knew every Blue up in Blue-ville above
Was now happily showing the peace and the love

“And they’ve taken my Congress,” he complained in a snit
“They’re praying for peace, they are so full of shit.”
Then he clawed with Bush talons, crazily drumming
“Stop democracy now, keep the freedom from coming.”

“I know how to do it,” the Shrub growled out loud
And he made a quick plan that would make Beelzebub proud.
And he smirked and he sneered, “what a great dirty trick!
“With some lies and the press I’ll make every Blue sick!

“All I need is a gimmick!”
The Shrub looked around.
“But since truth is rare here it’ll never be found.
Did that bother the Shrub?
“No The Shrub coyly said
“If I can’t tell the truth I’ll tell whoppers instead!”
So he called his pet FOX, then he called on the Reich
And the pundits crawled out, telling “facts” that weren’t right

And the corporate press
Came to spread the attack
Start a Yuletide war
To distract from Iraq.

The Pastors of hate said “Happy Holiday, dead.
“We think with out butts and we don’t use our heads.
“We hate all the Blues, yes our compassion is done
“They’ll pray to our God at the point of a gun!
“Then soon will we wake up, we know what they’ll do!
“They’ll cry and they’ll fuss and we’ll tell them ’screw you!’
“And the Blues up in Blue-ville will act as we tell them to do!”


“Here it comes,” cackled Shrub
“This I simply MUST hear!”
And there was a new sound rising up from the crowd
It started out low and then it got oh so loud!

He glared up at Blue-ville
His shorts in a bunch
What he saw hit him hard and he brought up his lunch.

Every Blue up in Blue-ville, the weak and the strong,
Was speaking and telling the Shrub was all wrong.
He hadn’t screwed Holiday freedom at all
It came
The Liberty came and it drove Shrub insane

So what happened then?
Up in Blue-ville they say
The FASCIST right wing really lost it that day!
O’Reilly went home and he started to pout!
Rush Limbaugh killed pain, Oxycontin no doubt
Anne Coulter threw up ’til her implants fell out

And the Shrub
Drank Drank Drank
With a whine and a shout.
Posted by Fran at 4:35 PM

omg...this is Wonderful...yup for sure you are in my Friday Blogroundup...

Fran, husband & I just read this OUTLOUD, you know Dr Suess is meant to be read outloud, and we laughed our brains out. If, if, if! people would just turn their backs on him & his echo-chamber & stop listening or acting on his crazy-ass policies, treat his whole crowd as invisible pariahs, maybe we could all have a chance at happiness, not just in Blue-Ville, but everywhere! ps, the imagery of bush with talons digging in the carpet is perfect!

I thought they did an excellent job with Bush morphed into the Grinch photo.
Really, Seuss was ahead of his time, he took hot button issues and made them into kid stories... hoping both the kids & parents reading them would learn. Deforestation, Consumerism, and discrimination-
pretty heavy stuff-
he made it fun & gave it some fluff.
I love to read Seuss, it makes my day
His talent & genius will not go away!
I'm glad you read this aloud & it made you bellow,
The story they told really captured the fellow.
Rhyming about things that put us in a pinch
tell the tale of that @#$%#$%@#$ Grinch!

Fran, we have a whole set of those parodies..I am going to put up one a day as we get closer to the 25th ;)

One of the author's is dying of cancer but he still loves to blog..bless him. I will let ya know when I post the next one ok?