What other Nobel Peace Prize winners have said... 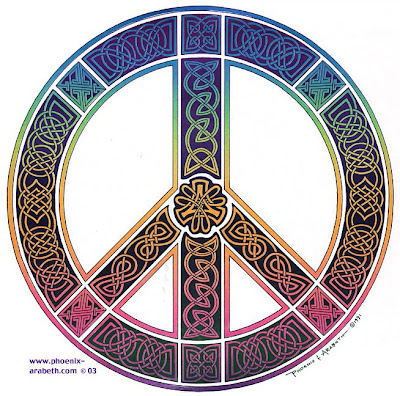 Mother Teresa ~ On War:
I was asking myself, what do they feel when they do this?
I don't understand it.
They are all children of God.
Why do they do it?
I don't understand.
Please choose the way of peace...
In the short term, there may be winners and losers in this war that we all dread.
But that never can, nor never will justify the suffering, pain or loss of life your weapons will cause.
From Mother Teresa's Nobel Peace Prize Acceptance Speech, Oslo 1979:
"And I think that we in our family, we don't need bombs and guns, to destroy or to bring peace- just get together, love one another, bring that peace, that joy, that strength of presence of each other in the home. And we will be able to overcome all the evil that is in the world. There is so much suffering, so much hatred, so much misery, and we with our prayer, with our sacrifice, are beginning at home. Love begins at home, and it is not how much we do, but how much love we put in the action that we do."
She refused the conventional ceremonial banquet given to laureates, and asked that the $192,000 funds be given to the poor in India, stating that earthly rewards were important only if they helped her help the world's needy.
Dr. Martin Luther King Jr. Nobel Peace Prize acceptance speech, Oslo 1964:
"After contemplation, I conclude that this award which I receive on behalf of that movement is a profound recognition that nonviolence is the answer to the crucial political and moral question of our time - the need for man to overcome oppression and violence without resorting to violence and oppression. Civilization and violence are antithetical concepts. Negroes of the United States, following the people of India, have demonstrated that nonviolence is not sterile passivity, but a powerful moral force which makes for social transformation.
Sooner or later all the people of the world will have to discover a way to live together in peace, and thereby transform this pending cosmic elegy into a creative psalm of brotherhood. If this is to be achieved, man must evolve for all human conflict a method which rejects revenge, aggression and retaliation. The foundation of such a method is love."
"I refuse to accept the cynical notion that nation after nation must spiral down a militaristic stairway into the hell of thermonuclear destruction. I believe that unarmed truth and unconditional love will have the final word in reality."
"Genuine brotherhood and peace is more precious than diamonds or silver or gold."
President Jimmy Carter Nobel Peace Prize acceptance speech, Oslo 2002:

Imperfect as it may be, there is no doubt that this can best be done through the United Nations, which another American, Ralph Bunch, described here in this same forum as exhibiting a fortunate flexibility, not merely to preserve peace, but also make change, even radical change, without violence.

He went on to say -- and I quote -- "To suggest that war can prevent war is a base play on words and a despicable form of warmongering." He said, "The objective of any who sincerely believe in peace clearly must (be) to exhaust every honorable recourse in the efforts to save the peace. The world has had ample evidence that war begets only conditions that beget further war" -- unquote.

In order for us human beings to commit ourselves personally to the inhumanity of war, we find it necessary first to dehumanize our opponents, which is in itself a violation of the beliefs of all religions. Once we characterize our adversaries as beyond the scope of God's mercy and grace, their lives lose all value. We deny personal responsibility when we plant land mines, and days or years later, a stranger to us, often a child, is crippled or killed.

From a great distance, we launch bombs or missiles with almost total impunity, and never want to know the number or the identity of the victims.

Ladies and gentlemen, war may sometimes be a necessary evil. But no matter how necessary, it is always evil, never a good. We will not learn how to live together in peace by killing each other's children. The bond of our common humanity is stronger than the divisiveness of our fears and prejudices. God gives us a capacity for choice. We can choose to alleviate suffering. We can choose to work together for peace. We can make these changes. And we must.

"At times this is joined by a reflexive suspicion of America, the world's sole military superpower. Whatever mistakes we have made, the plain fact is this: the United States of America has helped underwrite global security for more than six decades with the blood of our citizens and the strength of our arms."

Although he was never awarded a Nobel Peace Prize, Mahatma Gandhi was the shining star in the promotion of non-violence, and did so with great personal sacrifice.

I object to violence because when it appears to do good, the good is only temporary; the evil it does is permanent.

Mahatma Gandhi
When I despair, I remember that all through history the ways of truth and love have always won. There have been tyrants, and murderers, and for a time they can seem invincible, but in the end they always fall. Think of it--always.

What difference does it make to the dead, the orphans and the homeless, whether the mad destruction is wrought under the name of totalitarianism or the holy name of liberty or democracy?

I think it would be a good idea.
Mahatma Gandhi, when asked what he thought of Western civilization
Indian political and spiritual leader (1869 - 1948)
Posted by Fran at 7:00 AM

Honestly i love your blog..you write a real thing of the Noble prize i agree with your commitment..

Thank you London.
All the pro-peace factions, who embraced non violence chose that path, and did succeed.

We do need to learn lessons from the past.
We get very little news of what goes on in these countries we have wars in-- they even sanitize the name & call it a "surge".

the mostly impoverished people of Afghanistan live in harsh conditions. The one thing they do know is other countries have come & had military invasions- they come & go- they are in it for the long run.

Rather than the offensive military action, to have humanitarian aid- medicine, schools & help create jobs... give the locals the ability to get on their feet... would yield a more lasting positive result.

What we've been doing is not working.

It is good to review decades of perspectives from Nobel Peace prize winners.