It's never been done before in waters this deep

"It's never been done before in waters this deep"
Are you entirely sick of hearing this reason, mantra, excuse for why the floundering efforts BP keeps coming up with have failed, one after another?


The truth is this is all one grand experiment-- gone bad.


CBS news reports:
The most conservative estimate is 6,000,000 gallons of oil have leaked, but some scientists believe the spill has already surpassed the 11,000,000 gallons that leaked from the Exxon Valdez in Alaska.

Heavy crude oil has washed up along 65 miles of Louisiana coastline. The marshes could begin dying within a week. Marine wildlife is already dying: including more then 300 birds, nearly 200 turtles and 19 dolphins.

Under federal law, BP is in charge of the disaster response. So far, 22,000 people and 1,100 vessels have been deployed to remove the oil, along with 2.5 million feet of boom. So far, the company's used 785,000 gallons of chemicals on the surface and at the leak site to break up the oil. 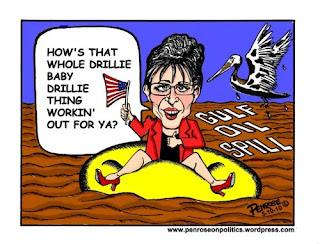 But late Monday, the EPA ordered that scaled back, because the dispersants are toxic. Whatever BP is doing about the leak, government officials made it clear -- it is not enough.The government isn't taking the lead because of a law passed after the Exxon Valdez disaster. The oil pollution control act requires companies to oversee and pay for cleaning up an oil spill. So far BP has spent more than $700 million. "


Might I add, it never should be done again.


If you want a total honest recount & truth on this matter 60 minutes talked to a guy from the rig, the last one off, it sounds like--- the lifeboats left him behind & he had to jump from 10 stories off the platform, into the oily/burning water.

Part of that segment also talks to an oil rig safety guy who says Deepwater Horizon would look like a tiny bubble, compared to the Atlantis oil rig, which @ full capacity would get 200,000 barrels a day of oil & has shoddy, below industry standard practices in place.
He was let go for calling them out on infractions & issues. (That was his job to be an engineer & safety supervisor).

This is an important story from a firsthand witness.
It is long, but entirely worthwhile, in fact I'll call it a must see.

Is the pathetic lack of response from BP an oil industrial plot to give Obama his Katrina? That is the 64,000 dollar question.

Our government at work.

i saw that interview on 60 minutes. i hope this guy will be a witness for the prosecution when some people are charged with homicide, among other charges.

Lib~ I think they just honestly have no clue how to handle stopping the blown pipe & the intense deep water high pressure flow. Because if they they did or could, they would want their precious profit making oil .They just don't have clue because none of it has even been done at this depth. Fixes that work in shallower waters do not work at this depth & temperature. Although they said they could handle a worst case scenario, we are finding out they can't.
Worse their pot shot guesswork is making things worse-- the chemical dispersant basically breaks up the globs of oil, just sweeping them under the surface, only making them MORE toxic than just the toxic oil itself.

This junk shot theory, blasting stuff up the pipe, could potentially cause that pipe to explode & gush @ 12x the rate.

It's a total crap shoot.

Christopher~ In the real world, people would be fired.

nonnie: This man is the star witness, and I am glad he recorded his observations, because I would think his life would be on the line.
He clearly witnessed the chain of events that culminated in this disaster. I'd be watching my back, if I were him.
But to hear both all the critical parts of the story, and his personal experience, and the jump off the platform. .... that is gutwrenching, and his will to live & series of events he endured- after all that- so many brushes with death, he becomes the primary whistleblower.

Plus did you catch that "safety meetings" involve talk of how much money the delay was costing & to hurry it up. That's BP's version of a safety meeting?

fran, i was thinking the same thing--that guy was really smart for getting his story recorded. bp had better hope that he doesn't get even so much as a scratch on him now, because then they'd have an assassination conspiracy following them, too. i'm sure bp is trying mightily to pay off their workers so they won't talk. i hope more of them are like this guy and want to the truth to get out.