NOW they care about jobs....

Oh gawd! Election years can get on your very last nerve.

#1. I loathe the term "Obamacare". It is heal care reform, people and giving it a derogatory nickname is just another demonstration of disrespect for the president.

#2. If the Republicans have their panties in a knot, it must be a good ruling from the Supreme Court.
Learning that Chief Justice John Roberts joined the liberal block on such a major issue, I give kudos to him for not casting his vote in a partisan way. I have a new respect for him.

#3. What we have is a very watered down health care reform package.... the for-profit insurance companies are still running the show, and now they have some restrictions. They also have kids age 18-26 as new customers on their parents policies, regardless of if they are full time college students- so they get some of the healthiest new clients to add to their customer base.
(What are they complaining about? They have more customers, that equals revenue & *jobs*.)

#4. On a personal level, my college kid was able to get much needed dental care as a result.
I like that pre existing conditions denials have been eliminated. Insurance companies were cruising the gravy-- we only take healthy people, those who really need coverage.... no care for you!
In most cases waiting for health care often results in increased costs & severity.


Here's a quick summary of the new health care protections:
Under the new law, health care insurers will no longer be able to do the following:
• Deny coverage to children with pre-existing conditions: For children younger than age 19, health plans can no longer limit or deny coverage simply because the child has a pre-existing health condition. This provision does not mean that such coverage will be inexpensive, but at least coverage will be available.
• Impose lifetime limits or caps on health coverage


• Free preventative health services: New health plans are now required to offer access to preventive services such as screenings, vaccinations and counseling at no charge, including nocopayment, co-insurance, or any deductible. Depending on your age, preventative services may include blood pressure, diabetes, and cholesterol tests; many cancer screenings; routine vaccinations; flu and pneumonia shots; and regular well-baby and well-child visits, from birth to age 21.


• Young adults can stay on parent’s plan until age 26. (If they don;t already have coverage through their own employer.) The new rule applies even if the child does not live at home or is married. They do not need to be ful time college students.


• Choose a primary care doctor and pediatrician. You can also see an OB-GYN doctor without getting a referral from your primary care physician.


• Use the nearest emergency room without penalty.
-Source US News 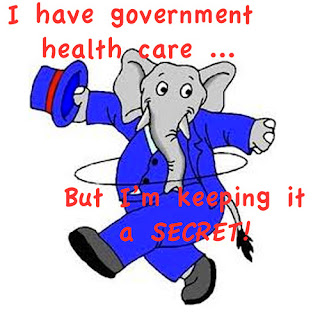 In closing~
The Republicans have not given any care about jobs, or the unemployed (cut back length of benefits), they have fought like pitbulls to keep tax cuts for the rich.  So it's rich that their comments about health care reform, play the "jobs card". Read it & laugh-

"The president's health care law is hurting our economy by driving up health costs and making it harder for small businesses to hire. Today's ruling underscores the urgency of repealing this harmful law in its entirety."

"Today's decision makes one thing clear: Congress must act to repeal this misguided law. Obamacare has not only limited choices and increased health care costs for American families, it has made it harder for American businesses to hire."

The lockstep GOP already has their prescribed talking point :


"harder for American businesses to hire".

Funny that FAUX news first reported that the whole bill was overturned/thrown out. Then they had to come back & say "we are getting conflicting reports", then say ooops! The court upheld the Health Care law.
Reminds me of the election reporting of 2000....
they declared Bush the winner, when Gore had more votes.
The power of wishful reporting?

This is NOT the outcome I expected, for Justice Roberts to join the liberal block & keep this legislation. Virtually ALL his other votes go w the right wing block.
This is a landmark Supreme Court decision, and it was interesting to hear a description of the packed courthouse & throngs of people outside.

When the idea of the public option was supported in Obama's 2008 election campaign, to the bitter fight to get anything, people began to think we just have to get our foot in the door to start health care reform.
I'm sure the ins bean counters are already scheming up ways to make it all more profitable for themselves.
What cracks me up is they keep saying "this will cause the cost of insurance to go up:.
Hello! Insurance rate hikes have been the norm for as long as I've been around.
Rate hikes are old news. They never discuss how having 50 million uninsured Americans effects rates & costs. Or the ethics of letting people suffer & die.
The US is the only industrialized country with no universal health care.
Of course Romney is all over this like a fly on shit. The fact he evades taxes by stashing money in the Caymans should make him automatically ineligible for the presidency.
Figures the party of NO now has a platform of simply being against the health care plan.
They have nothing to offer, just opposition.