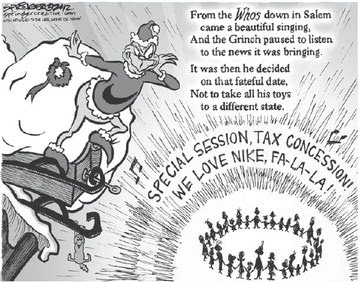 UPDATE ON THIS STORY: THE STATE LEGISLATURE DID GRANT NIKE THE
SPECIAL/SWEET TAX DEAL.  THEY PLAYED THE JOBS CARD.  500 JOBS HAVE BEEN PROMISED, NEVER MIND IN 2009, 500 WORKERS LOST NIKE JOBS.
THEY TOLD THE GOVERNOR THEY NEEDED TO BE WOOED,
AND NOW THE REST OF THE TAXPAYERS ARE SCREWED!

THAT INSPIRED ME TO WRITE THIS BLURB IN DR SEUSS STYLE:

The land called Nikeville is a special place-

Where common sense takes an about face!

Stateside huge profits are unfurled!
No need to disclose the factory worker's condition--
Profits are coming to fruition!
In Nikeville, you can skirt all the rules-
like building an Arena with capacity for 12.541 fans,
and parking for 377. Not sure who approved that path,
but it looks like someone did not do their math!
Have a Nike exclusive track meet marketing fair-
who cares about graduation- it's about sports they care!
Uncle Phil owns this place, so it is no wonder they
pressured the Guv--
If you want Nike jobs, show us special tax break love!
So special the favor could not wait,
Oregonians paid extra for them to hurry up & legislate.
Give them a tax break & in a hurry-
watch the politicians scurry.
Bend the tax rules for 30 years
because Nike has tax fears.
It's not corporate welfare the legislators proclaim-
It's about "methodology" by which taxes are calculated , they said-
But the corporation & the government are together in bed.

They scrambled & shuffled & acquiesced
giving Nike what they love best.
Being a corporation with $44 billion-
if you can get rid of taxes- Nike can make a Zillion!
Money in their pockets is what they love best,
Oregonians can pick up the tab for all the rest.

Nike needs a hand out.

That is what they told Governor John Kitzhaber of Oregon.

They might be willing to build more here in Oregon, but they want a 5 year corporate tax freeze.
and a 40 year special lock in on only being taxed for Oregon sales, not gross revenues.

Yes, Nike, the people who sell gym shoes that cost more than $100 bucks.


The governor is buying this "we need tax breaks"- even going so far as to call a special session of the legislature to rush order this demand to the tune of $13,000 a day.


I'd like the Governor to ask how much the factory workers are paid in Asia- Indonesia, China, Taiwan, India, Thailand, Vietnam, Pakistan, Philippines, Malaysia


Nike has contracted with more than 700 shops around the world and has offices located in 45 countries outside the United States. Most of the factories are located in Asia, including Indonesia, China, Taiwan, India, Thailand, Vietnam, Pakistan, Philippines, and Malaysia. Nike is hesitant to disclose information about the contract companies it works with.

Corporate welfare. Just DON'T do it
Posted by Fran at 7:19 AM