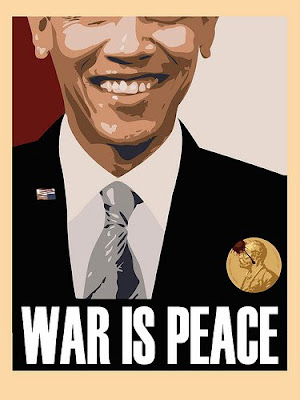 Note the blood stain in the Nobel Peace Medal, & the upside down US flag, indicating a Nation in Distress.

I'm sick of endless wars & violent responses. They are beating the drums of war.... I hate the fact one person can decide to rush to a violent response, and then come back for Congressional approval. The masters of war always think it will be quick & easy. When you open the door to violence, you really don't  know what you are going to get... and for hell's sake, have we not learned anything from past mistakes? These military interventions are never quick & easy. Some other are killed who were not meant to be. The damned bloody mess is repeated again & again.

This sucks! The rest of the planet is staying out of Syria's Civil War, but once again, the US wants to go it alone & go to war. Might I point out that while contemplating more military action, we are still stuck in the Afghanistan, since 2001.

The Nobel Peace Prize is a joke. We have not had one day of peace under Obama. And now he wants to start a new war. Where is the sanity?!?