A Salute to an Honorable Soldier

"An Oregon soldier whose case has caused a stir in anti-war groups nationwide has been sentenced to six months in jail, a loss of pay, a reduction of rank and a bad-conduct discharge for being absent without leave. 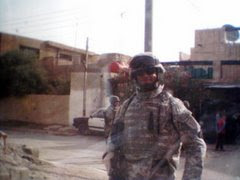 Pfc. James Burmeister, who was born in Portland and raised in the Eugene area, received the sentence Wednesday from a military judge at a court martial held at Fort Knox, Ky. Burmeister agreed to plead guilty to the charge in exchange for an agreement by military prosecutors not to seek more serious charges.

Anti-war activists from filmmaker Michael Moore to groups such as Veterans for Peace have called publicly for Burmeister to be released, arguing that he did the honorable thing by refusing to carry out unethical orders.

But Army Capt. Christopher Cross, a military prosecutor, told the Louisville Courier-Journal that "soldiers considering going AWOL... must know there are consequences for abandoning their comrades."

Burmeister said he left the Army without permission because he had become disturbed by a tactic known as "small kill teams," in which soldiers would plant U.S. government equipment in parts of Iraq in the hopes that insurgents would come to claim it. Army snipers would then have an opportunity to shoot the Iraqis before they could make off with anything.

Burmeister said he complained to superior officers that the snipers couldn't know for sure whether the people they shot were actually insurgents, or presented any threat to U.S. forces.

Eventually, the soldier from Cheshire, Ore., was injured by a roadside bomb and sent to Germany to recuperate. While there, he left his unit and went to Canada, where he campaigned against the use of "small kill teams."

I caught an interview from Burmeister's Mother. She was quoted as saying the military failed to address the Post Traumatic Stress Disorder serving time in Iraq had caused him. His punishment was too harsh- but his plea deal gave him 6 months in jail, instead of 9 months. The family had a 10 minute post trial visit, then they recommended the family leave, so they did not have to witness their son in handcuffs & leg shackles. She said, "This is no way to treat a soldier".

To be honest, I would have done the same thing Burmeister did. I woud rather serve jail time, then have to live a life with the memories of the hell of the occupation. Make no mistake, military prison is no easy way out. But at least Burmeister was able to follow his moral compass, and refuse war. I hope he uses his time in jail to write his memoirs of the occupation. So much goes on there we don't know about.

While we are on the topic of mistreating soldiers.....

When Gina Gray took over as the public affairs director at Arlington National Cemetery about three months ago, she discovered that cemetery officials were attempting to impose new limits on media coverage of funerals of the Iraq war dead -- even after the fallen warriors' families granted permission for the coverage. She said that the new restrictions were wrong and that Army regulations didn't call for such limitations. 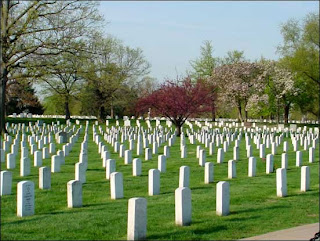 Six weeks after The Washington Post reported her efforts to restore media coverage of funerals, Gray was demoted. Twelve days ago, the Army fired her.

In my humble opinion, the Military should honor the wishes of the families of the deceased. These soldiers fight for freedom and pay the ultimate sacrifice. They should be granted their freedom of choice in death. It is the very least the military could do.
Posted by Fran at 9:19 PM

Ah, but as Babs Bush said, so callously, we should not trouble our beautiful minds with body bags and death. She said it isn't relevant.

Diva--- that & acknolwedging PTSD as being real . This soldier had a conscience, he questioned the bait & kill technique.

There has been a concerted (and successful) effort to keep the negative reality under tight wraps. Criminal really.

Fran:::
Bless him that he still had a conscience even while suffering PTSD....This is so horrendous...and heartbreaking...his poor mom....and family....

thank you for reporting on this and the Arlington Story....

I have said this before and I'll reiterate it here:

I have been living in shame for the past 40 years because I didn't throw down my weapon and go to Leavenworth, Kansas prison for 20 years instead of carrying my rifle for a year in Vietnam.

I applaud and honor any person who stands up for what he or she knows to be right. I stand now, never too late to do it, but perhaps too late.