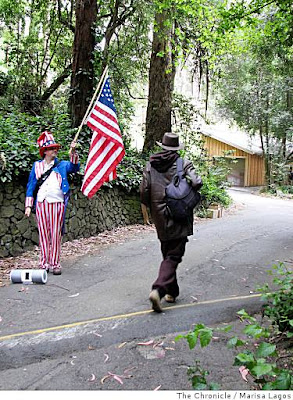 In a fitting patriotic tribute, citizens of San Francisco wracked their brains to come up with a proper memorial to President George W. Bush.

The San Francisco Chronicle reports:
San Francisco voters will be asked to decide whether to name a city sewage plant in honor of President Bush, after a satiric measure qualified for the November ballot Thursday.
Backers of the measure, who for several months circulated a petition to place the measure on the ballot, turned in more than 12,000 signatures on July 7, said organizer Brian McConnell. The Department of Elections on Thursday informed those supporters, the self-proclaimed Presidential Memorial Commission, that they had enough valid signatures - a minimum of 7,168 registered San Francisco voters - to qualify for the November ballot.

McConnell, who came up with the idea over beers with friends, often donned an Uncle Sam outfit to drum up support for the petition. The all-volunteer group of signature gatherers often carried around an American flag and blasted patriotic music from a boom box to attract attention. He said the campaign to pass the measure will be an equally grassroots effort.

The measure, if passed, would rename the Oceanside Water Pollution Control Plant the George W. Bush Sewage Plant. McConnell said the intent is to remember the Bush administration and what the group sees as the president's mistakes, including the war in Iraq. 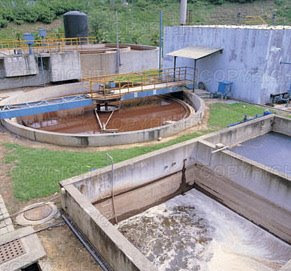 Some people aren't laughing, including the San Francisco Republican Party, which sees the measure as an embarrassment, even to this famously liberal city. Chairman Howard Epstein has vowed to fight the measure with all means available to him.
A White House spokeswoman, when asked about the measure, refused to comment."

There you have it, folks- sludge & all. I'm guessing the more people fight the measure, the more popular it will become. Who here thinks this is a great idea?
Posted by Fran at 5:54 PM

I look forward to the co-ordinated flush.

What a proper tribute! Kudos to SF.... maybe they will start a wave of similar "memorials"-- it is a legacy unlike any other!

BTW, I have announced my candidacy for Prez. I am auctioning off cabinet positions.

So Jood- what will your campaign slogan be....
Could't get any worse?