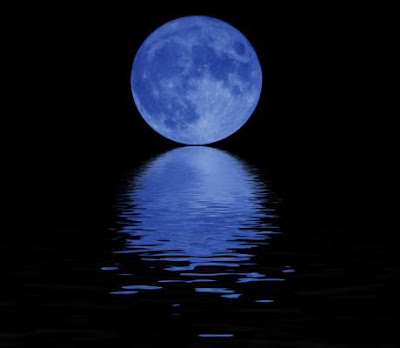 On New Year's Eve we will have a Blue Moon.
Let's hope this is a good omen for the New Year!
The phrase simply refers to the second full moon in a calendar month, something that NASA says hasn’t happened on a New Year’s Eve for nearly 20 years.
December 1990 ended with a blue moon.

Most months have just one full moon, because the 29.5-day cycle of the moon matches up pretty well with the length of calendar months. Occasionally, there will be two full moons in a month, something that happens about every 2½ years, NASA says.

As for the moon actually looking blue: it’s possible, but that’s sometimes caused by fine dirt circulating in the Earth’s atmosphere or the dark blue tone of the sky.

New Year's Eve blue moons are rarer, occurring every 19 years- the next will be in 2028.

What a lovely moon! Hope it portends good things for 2010.

"Happy New Year" is much better than "Happy New War"!

i'll add an amen to the above. i hope the new year is a healthy, safe, and peaceful one for all of us.