What would be enough? 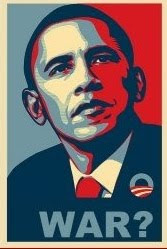 With Afghanistan's 60% unemployment, and chronic poverty
situations, the locals are crushed between aggressive Taliban forces threatening death, and US troops- not fluent in the language, dropping bombs & engaged in an intense ground fight. The average lifespan in Afghanistan is 44. The people in Afghanistan need humanitarian aid & assistance for their own stability.

I sit here listening to President Obama talk about avenging 911.
Is there no statute of limitations?
More of our own troops have died in these wars, than the number of people who were killed in the 911 attack.
2976 people died in the 911 attacks
5296 U.S. Soldiers have died in Iraq & Afghanistan wars combined, and counting.
Hundreds of thousands have died (civilians, women & children included), in these wars.
Have we not yet spilled enough blood?
How much more destruction & bloodshed will equal revenge?
Obama already sent in a surge of 21,000 troops to Afghanistan in April 2009.
From CNN:

The White House estimates that it costs about $1 million per year to send just one soldier or Marine to Afghanistan.

If Obama authorizes 30,000 more troops, that would add another $30 billion to the cost of the war.

The cost will also be offset by the anticipated reduction of troops in Iraq, which is expected to be cut from more than 100,000 troops to 50,000 by the end of next year.

I accept no more promises, until the initial promises are kept.
Out of Iraq
Shut Down Gitmo
One war leads to another....
Obama is now talking about Pakistan, and the need to protect and perhaps war there as well. We are already dropping bombs from drone planes in Pakistan.
Our cause is not just.
Barack Obama just took full ownership of these wars ~ and lost my support.
Consider this:

He lost my support, too. If you listen to NPR, the Bank of America is promising to spend $1.5 trillion in the next ten years to "support community development." Yet, the Congress of the US says $1.0 trillion for ten years on health care is too much. WTF, Bank of America, using tax payers money, can say they're going to spend $1.5 trillion on community development but the Congress can't spend less than that on health care? And, where is Obama on universal health care these days? Replacing Bush!!!

Maybe I'm a little paranoid, but I think Obama was taken aside by certain power brokers and told to keep in line with the Military Industrial Complex...Or else.

Obama knows the Reich Wing regime that really holds the power will send him into another Dealey Plaza if he fails to obey them.

Doing the right thing could literally cost him his life. This is why Obama is only a company manager instead of a great president.

If by some miracle Obama is re-elected, MAYBE there will be an end to the occupations. But the people damn well better loudly show their support for peace.

not just more troops, but more civilians are gonna be sent there. that same rationale started the long downhill slide in vietnam.

will this war increase be any more palatable if we somehow get some puny watered down health care reform soon?

I wrote long & thoughtful response & it went to the ether! Argh!

So no quick responses~

E Prof~ Good to see you after your long break, sorry it is under this circumstance.... but enough already with this endless war scene.
B of A steps up- with stim $ no less. How many B of A mortgages were foreclosed on in the meantime???

Dave~ Oh yes his handlers are clearly in charge, Reelection? I think what he just did gives him a snowball's chance in hell.
Personally I want to vote for Grayson D-FL. for pres in 2012.
Maybe we should all just make him a write in candidate, spare him the expense of a campaign?

Obama: "We Did Not Ask for This Fight"
Bush: "We Did Not Seek This Conflict"
Obama: "New Attacks are Being Plotted as I Speak"
Bush: "At This Moment ... Terrorists are Planning New Attacks"
Obama: "Our Cause is Just, Our Resolve Unwavering"
Bush: "Our Cause is Just, Our Coalition [is] Determined"
Obama: "This Is No Idle Danger, No Hypothetical Threat"
Bush: "The Enemies of Freedom Are Not Idle"
Obama: "We Have No Interest in Occupying Your Country"
Bush: "I Wouldn't Be Happy if I Were Occupied Either"
that was reflected in that lackluster speech. Did he use Bush's speechwriters too?

Not only is Obama using Bush's war advisors garbage in /garbage out......
but is he using Bush's speechwriters too?
That speech sucked- and I felt like I was listening to some pandering snake oil salesman.... telling us there is an end date-- and at the same time throwing in a back up contingency... we will always do an at the time assessment... basically saying if things are still bad at the time, we will have to stay longer.

Something for everyone.... nothing but more of the same?

My language resumed its same uncontrollable profane mutterances (as were uttered the first 8 years of this decade) a 1/3 of the way thru Obama's speech. I wanted to shut it down, but Mrs. Dada wanted to hear all the lies. So we compromised. She finished his speech whilst I erupted in spontaneous free speech profanities ever' so often.

I appreciate Dave Dubya's saying aloud what many of us suspect re the real Powers That Be vs. The President figurehead "leader" (they control), but are reluctant to express it.

Conspiratorial? Perhaps. But after recent books confirming JFK's decision to announce the removal all US troops from Vietnam by 1965, just as soon as he got back from Dallas.....?

Of course word had leaked that this announcement was pending, but I wanted to wait & see if Obama was going to go through with it.

Although I made some interactive comments during the speech, I am mostly overcome with the reality of the pain & suffering this message brings.

I am sick & tired of this country being at war, and us being told we need to take cutbacks and or denial (of health coverage), when Congress & the President don't even blink at the billions going to wars.

Michael Moore said he favors having a military draft.... for the most wealthy & Congresspersons kids.

If they like war so much let them both pay for it, and send their kids to the front lines.