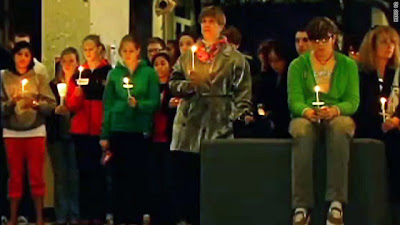 Last night there was an empty band chair in the Rutger's Symphony concert. Missing was Tyler Clementi, a talented violinist, who, this week had taken his own life. Tyler was 18 years old. Tyler was an Honors graduate. Tyler was a student at Rutgers University. Tyler was gay.

Tyler took his own life, after two students invaded his privacy as a "prank", by running a webcam of him in an intimate encounter with another man.  His dorm roommate, and another student streamed live from the privacy of his room, essentially outing Tyler and the other person, without their knowledge or consent.

The Symphony band chose to honor Tyler by leaving his band chair in place, but empty.
The Rutgers College football game dedicated some moments of silence, in his honor.
A large memorial vigil was held on campus.
Too bad Tyler did not know of all that support & solidarity before he decided to take his own life.
Once word was out, Tyler would have been surrounded by many who agreed what the students had done to him was wrong.

Even the student whose school canceled the entire senior prom because she wanted to attend with her female date & wanted to wear a tux, although some students blamed her for ruining the prom-- once word got out beyond the school, she wound up on the Ellen DeGeneres show, and was given a full ride scholarship gift, tons of support & even an offer to have a prom even without the need for school permission.  She declined the prom offer-- it was the point of the matter, the school should not have discriminated, but she did take the college scholarship & found a groundswell of support for her courage in being true to herself.

Turns out there were five gay teen suicides just this last month.

We need to look at how we as a nation have created such an atmosphere.
It does not help that our nation has allowed the discrimination to persist in the 21st century.
Gay marriage is only allowed in a handful of states.
The Military requires gay soldiers to not tell, and personnel to not ask if they are gay.
If you tell, or even of a third party tells, that is outs you without your consent or permission, you can be thrown out of your military career- regardless of your record of service (often exemplary & outstanding).

Clearly, our country does not grant equal rights.
You might be able to marry in one state, but it won't be legally recognized in another?
Tyler's fear of what society might think, or angst that the other party was "outed" against their will, was prevalent enough to cause him to take his own life.

What is our excuse as a country?


There's a grief that can't be spoken.
There's a pain goes on and on.
Empty chairs at empty tables
Now my friends are dead and gone.
Posted by Fran at 12:06 AM

schools should take some of the money they piss away on football and spend it on classes in respecting other people. by the time people get to college, they should know that they should respect people's privacy and treat everyone as they would like to be treated.

Hi Nonnie~ Oh they sure do piss away money on sports.... almost forget the whole point of college for Education! Some mandatory diversity classes would go a long way.
I thought it interesting the 2 who did the harassment were both in different ethnic groups, one w brownish skin, the other Asian.
People pick on others to make themselves less of a target.

Even in the 21st century, being outed as being gay can be a career ruining event. Some families disown their own kids because they carry some old prejudices or gross misinformation. Your kid is more in danger of molestation from a Catholic priest, or a heterosexual man than a gay person... but we've seen all these ugly lies surface when they have elections about marriage equality.

Frigging elections about marriage equality
in the 21st century!

I'm just saying it was not just in Tyler's head.
The discrimination swirls around this nation openly. Damned shame too. Sadly, it's not just high school kids (as seen in the recent Calif. election where equal rights to marry was voted down). But now being challenged in court... but it's always this constant fight, on so many levels.

I can believe small time America has a small mind and that, as a whole, there are more open minded people in this country than not, they just aren't as vocal and loud. We need to step up and get loud!

I hear you Lib~ too bad all those who stood vigil in solidarity were not known to Tyler.
Fist in air in solidarity!