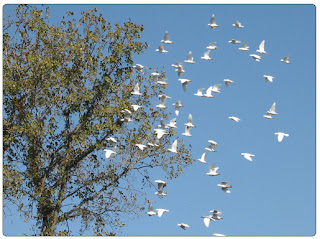 Our beloved Grandpa Mac has passed away today at age 83. He was surrounded by his Sister, and two Grandsons at the time he left this world, & went peacefully.
He lived a long and wonderful life, and was more like a Father to me than a Father-in-law. He was an amazing, multi faceted person.
First an foremost he was a wonderful Father, Father-in-law and Grandfather. We looked to him to be the wise mentor. When I got together with his son, and we created a blended family, Grandpa fully embraced the family into the fold. He loved the Grandkids and traveled across the country annually to spend time, and they almost always built in a visit to one of the National parks for our get togethers.
He and Grandma conspired to spoil the children fully, with gifts & desserts, but also with their time & wisdom.
For many years Grandpa called us weekly on Saturday mornings.  We loved to share what was going on in our lives, talk about current events, and our views re progressive politics. When the kids got older, he & Grandma asked for permission to take the  kids to travel and visit for the summer months. As a result the kids saw Niagara Falls, the Grand Canyon, Colorado, Utah, Yosemite, Yellowstone, The Tetons, D.C., Olympic Ntl park, Crater Lake Ntl park, and Hocking Heights Ohio & umpteen trips to the Oregon coast.
They had fun traipsing around with the kids, and having family time together.
Yes indeed.... it was quite nice & the last time I visited with them was a trip to the Redwood Ntl Forest, before Grandpa got cancer, and had bypass surgery, stroke, a pacemaker installed, and fell and broke his hip.
Grandpa lead quite a wonderful life, with many twists and turns.
He was both a (liberal) Minister, and a College Prof.
When he, his wife & their young daughter became sick with polio, the polio passed in Mac & the daughter, but his wife became physically disabled for life (pre polio vaccine).
In fact she was pregnant (with my husband) when she became ill. Near term, they did an emergency c section & hoped the virus did not cross over into the baby. He was taken & quarantined & spared the disease. There are photos of Kathy in an iron lung. But even in the midst of her tragic health situation, she did not let that slow her down. In a wheelchair, she went on to get a Master's degree, and create a home health service, allowing disabled people to live at home & get the help they need.
She lived before the ADA (Americans with Disabilities act) existed, so they had to pioneer ways to get her around & function in a world with stairs, curbs, and non accessible bathrooms.
Theirs is the only really happy IRS story I know of... they were audited- they brought her in the wheelchair with stacks of their receipts & the IRS auditor wound up finding additional medical writeoffs they could take!
Grandpa was present for the MLK "I have a Dream" speech. A group from his church took a bus together. He said he was just a tiny speck in that huge crowd. He was also involved in the Southern Christian Leadership conference- he took the affluent white neighborhood discarded (newer) school books down to the deep & deeply segregated Mississippi, so the children there could have books to learn from. The impoverished areas & lack of equal rights put black children at a huge disadvantage. He was involved in the Civil Rights voters registration campaigns as well, at a great personal risk to himself.
He took his son, my husband to the famous & historically huge March in D.C. opposing the Vietnam war.
He got in trouble with his congregation for openly welcoming GLBT people into their church.
Some old members left that church & took their money with them, but Grandpa was all about peace & justice & equal rights. He did not waiver.  Even into his early 80's Grandpa still went to peace vigils, and turns out he was involved in many things- donor for a collective land trust for low income housing, a "no one alone in the hospital ER" companion program. He ministered to those in prison & helped keep families in touch throughout incarceration. He worked to help & feed & care for the homeless, did vigils against death penalty sentences. He did all kinds of wonderful, loving, helpful things his whole life. A lot of it he never mentioned, just did these compassionate things, quietly & behind the scenes.
Grandma Kathy passed away before our first child was born. She never got to see him, but knew he was on the way. Her two grandsons & I never got to meet her.  A few years later, Grandpa remarried, another Minister, Grandma Naida. She was the driving force in putting together family get togethers, and a pretty amazing lady. A strong feminist, and also another person with an amazing list of things she did in her life, including a long stint teaching at a girls school in Africa, and later doing socialwork/ministry in the low income neighborhoods of Cleveland.
She had a Master's degree, and Grandpa had a Phd. They were like a set of bookends.
Always humble, making a difference & they were not preachy preachers... they truly walked the walk.
So when Grandma Naida passed away in August, I think a part of Grandpa went with her.
Grandpa Mac set the bar high for us to even try to follow in his footsteps.
He was one of the most amazing people I ever met & came to love & know.
It is bittersweet- we will miss him greatly, but we are thankful he suffers no more.
Free at last! 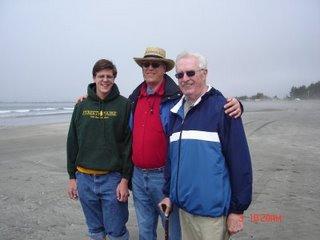 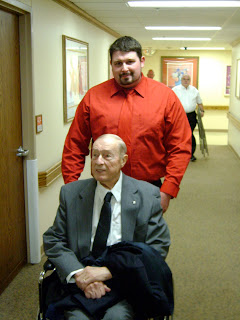 rest in peace, grandpa mac. you have most certainly earned it. a life well lived.

There is indeed a special place in Heaven for men like your father in law. what a beautiful tribute to a wonderful man. RIP Grandpa Mac.

tremendous recap of a wonderful life! Grandpa Mac did not just talk the talk. now he is at peace, no more pain, but a full legacy of a lifetime of good works and gentle influence. he was obviously much loved and deservedly so. he will be in your hearts forever.

thanks all ~ working on putting a memorial together for Grandpa. We miss him already.