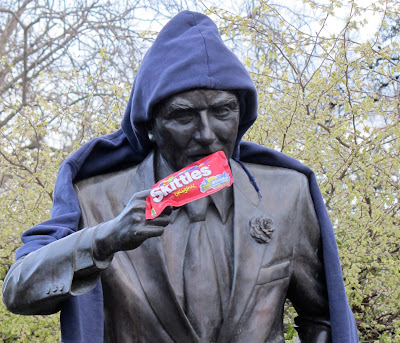 Went to a Trayvon Martin "Hoodie Rally" on Monday 150 people showed up, & they had some excellent speakers. A rep from the ACLU, & another Civil Rights lawyer, Lauren Regan spoke- at length re the Castle Doctrine- she put it best:

"These Stand your ground laws, instantly make anyone with a gun "Judge, Jury & Executioner", and provide immunity from ever being brought to trial."

Obviously, Zimmerman, the shooter, felt emboldened to carry a gun, and ignore the 9-1-1 directions to essentially stand down & not get out of his vehicle & follow/chase/attack & kill Trayvon Martin.
There was also talk that racial profiling & prejudice is a nationwide problem, by no means limited to Sanford FL.

Trayvon Martin is "every one's child", because this could happen in any of the 23 states that have this type of "Stand your Ground", or better described as "Shoot First" laws.
This case both angers me to the core-, and brings me to tears.  An innocent kid was gunned down for no reason. Neighborhood watch just became lethal & fatal.
Our society of gun madness, indeed I left the rally, heartened by those who care, and took a stand about this injustice, only to learn someone opened fire at a California University & 7 had been killed.
The United States has become killing fields.
At what point do we admit there is a problem?