No Newt is good Newt 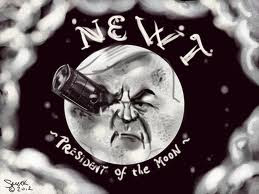 Newton Leroy Gingrich is bailing out of his book selling tour presidential run. His campaign was essentially over a while ago, but the dynamic duo-- Stepford wife Callista, and her "stand by your man" with the grin & nod whilst traipsing cross country, perhaps carrying all that baggage took it's toll .
Newt was full of himself  and a boatload of woes. Newt is a guy you can easily love to hate.  A classic old boy D.C, insider,
everything about him was  annoying-- from his "American Exceptionalism" platform, to his heartless dumping of wives & multiple affairs, and major ethics breach when he was Speaker of the House.  68 year old Newton & 46 year old Callista Louise can saunter off into the sunset. Calli Lou no longer has to keep all the Tiffany's bling in storage, as she tried to tone down the appearance of being out of touch with too much glitz & glitter of expensive jewelry, during the campaign.
Well now we can like the fact he is no longer running for president.
But before he embarks on his next political conquest- the Moon, lets have a listen & some laughs over some of the crazy ass things he's said over the years....
(Funny now that he is stepping down from the presidential run.)

For all the chatter about fiscal responsibility these jokers threw about, these guys ran their campaigns into the hole financially.
Gingrich leaves the trail with his campaign $4.3 million in debt, according to Federal Election Commission filings.


At the end of March, according to a report filed with the Federal Election Commission on Friday, Santorum's campaign found itself nearly broke, with over $2 million in debts.

Gosh! Don't you miss him already??

Actually, I will only miss his tarted out wifey.