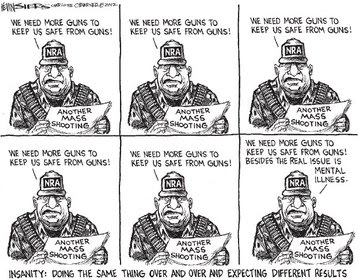 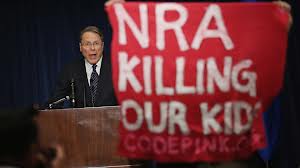 The week of silence from the NRA ended with an official response befitting Ebenezer Scrooge.

Armed Officers and or teachers in the schools is their *big fix* response.
According to the NRA mass shootings w assault rifles is the fault of:
• The gotcha media
• Violent Video games
• "Good guys" need to be armed with guns

The president got it right:

"We can't tolerate this anymore.
These tragedies must end & to end them we must change." 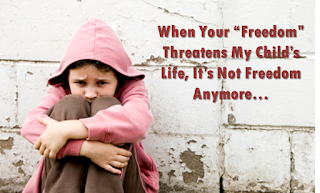 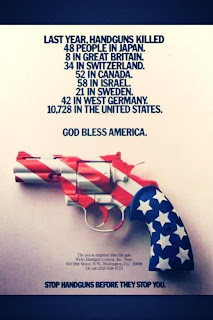 Here is the bottom line. I wish those who think there is no problem with assault rifles had to attend every funeral & service for the people who died this year, and especially for those children of Newtown CT.  Go feel the absolute devastation of the families grieving the loss of their young children.
Sit with the people sobbing because they can not contain the sorrow. See the small coffins for all those children, because this is not just a topical debate, it is the actual loss of lives, and having the bury 20 children is heavy heartbreak.
It has never been acceptable ( high school kids being shot & killed is not more tolerable than elementary school kids being shot & killed). But we do have an epidemic with young white males, using assault rifles going on shooting rampages in schools, places of worship, malls, movie theaters.
None of it has been acceptable, but this last incident has to be the damned wake up call. 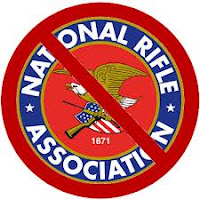 It will never be acceptable to shrug our collective shoulders & simply declare that out-of-control mass shootings "a complex problem", too complicated to address. The parents having to bury their young, innocent children do not deserve & should not accept the standard "Oh well, too bad, so sad" response. If ever there were momentum to take real action to curb this madness, it is now.
What more fierce advocates could you find than parents who had their children massacred in school?
That could be any school, anywhere.

Although it is true, the assault rifle & large ammo clip magazines are already out there, the genie is already out of the bottle, making no changes, or no effort to address these issues, would add insult to injury. Yes a crime. The Constitution gives us the right to bear arms, the Declaration of Independence calls for us to be endowed with certain unalienable rights--Life, Liberty & the pursuit of Happiness.

Happiness aside, Life is necessary to pursue anything.

There seems to be a solid pattern now, mental health issues, guns in the house or easy access, and after the fact realization that the shooters were "troubled".

The NRA's Friday before Christmas news dump was classic.
Hat tip to Senator Diane Feinstein for calling out the NRA on the topic.
Columbine High school had two armed officers on campus when those shootings happened & 15 people died. Not only is the idea of upping the gun ante, wrong, schools are struggling to have enough teachers & books, let alone a budget for armed officers. This NRA response is wrong on all accounts. 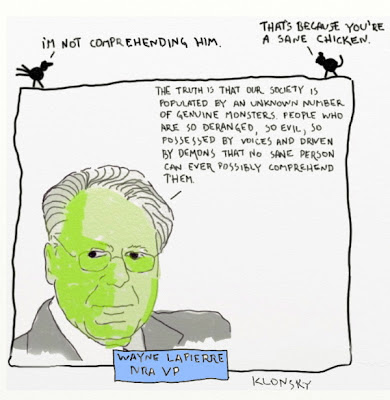 Of course the NRA solution would include the use of more guns rather than less guns. After all, they are an arm of the gun industry.

Damned shame. This is the wake up call & they are sound asleep.

I sure hope everyone is still so interested in making gun law changes a few months from now. Seems like we get all fired up in the aftermath of yet another horrible tragedy with little or no results when our short attn span fades.

It should not be so easy to acquire a gun ... simple common sense dictates more scrupulous background checks with no way of circumventing that process through gun shows and online purchases. c'mon, these are not toys being purchased, they are machines of death.

Something else that might help is if pharmacies had to notify authorities whenever certain psychotropic drugs are dispensed ... run the patient's name through a national data base to see if they have gun permits and follow through on that red flag.

You make total sense.... therefore this will be a real fight to get reform of any kind. Pretty damned low for the NRA to point fingers in other directions.
We need to collectively point the finger (you know of which one I speak) right back @ the NRA.

We are burying children & now Firefighters are being shot at in the line of duty to save & serve others, on X mas eve no less.

How much more absolute insanity w guns must we endure?

We have exceeded saturation level.