Good enough for the Founding Fathers


So many pro gun advocates insist it is their "Constitutional right" to own whatever weapons they like.
To back it up, at the time the founding fathers wrote this constitutional right, the guns of that era were flintlock pistols & muskets. If gun lovers were strictly following the constitution, we should do away with modern day semi automatic guns...

"Allow for the unrestricted ownership and use of guns and ammunition as they existed in 1789, when the Constitution and its first ten amendments were written. This would conform EXACTLY to the intent of the framers. It would satisfy the 2nd Amendment freedom to “bear arms,” without allowing for any deviations from ‘strict interpretationalism’ that would excuse the weaseling in of ownership of semi-automatic and automatic guns, and anything beyond ball, shot and black powder for ammunition: no full metal jackets, no nitrocellulose propellant, no late 19th century cordite-filled cartridges, not even percussion caps (from about 1830). Just flintlocks.
If it was good enough for the Founding Fathers, it’s good enough for you."
~Manuel Garcia jr.

in a care facility & ranted they had guns & concealed weapon permit. The facility called the police to report it & turns out the guy is a convicted felon, who is prohibited from owning any weapons. This is what they found in his bedroom, loaded & ready to fire, with five, 30 round bullet magazines. He also had a few other guns in the house. 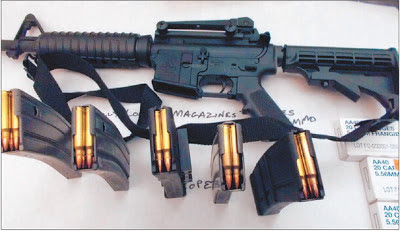 Even Grandma is not safe!
The guy was arrested for being a felon in possession of firearms, a probation violation, but due to lack of funds @ the jail, he may be released the same day. The police want to go after who sold it to him... not punish the guy who knew he was prohibited from owning them.
Personally, I'd feel better if he had a one shot at a time, musket, if he is going to be roaming the neighborhood, with a catch & release "justice system". Because I can't imagine the Care facility is resting any easier knowing this guy could show up, even angrier & this time with a gun in tow.

look at all those bullets--jesus!