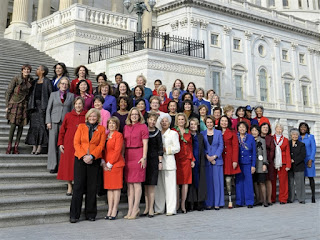 This photo was released with the following disclosure:
Pelosi’s office distributed the manipulated image on Thursday, sending out an email noting, “this version has the four members who were late photo-shopped in.”

So many had their panties in a knot because this photo was  "historically inaccurate".


"Ron Sachs, president of the White House News Photographers Association, said Friday in a statement to TODAY.com, "Today's 'doctored' photo is not a true representation of the moment that happened yesterday, which brings into question the integrity of photos released by the government."
At a press conference on Friday, Pelosi said, “Yeah, it was an accurate historical record of who the Democratic women of Congress are. It is also an accurate record that is was freezing cold and our members had been waiting a long time for everyone to arrive.”


Really? This is the big problem/issue Washington needs to fuss about?
"Photo integrity" vs actual integrity within the government, is wherein serious problems lurk?

Forget the $16 trillion dollar debt.....
or that Hurricane Sandy victims have been waiting more than 2 months for serious aid $.

When you state, up front, that latecomers were photoshopped in, there is nothing deceptive going on.  These are the 61 women of the  113th Congress.
(100 women overall, when you include the Senate).

With 61 women in the House Democratic Caucus, this group makes history as the largest number of women ever in a party Caucus in the United States Congress.

The more interesting story, is these new Women in government were saying  topics like birth control, Women's right to choose, and equal pay would no longer be acceptable topics to banter about  (the last session of Congress did just that). They are sick of the gridlock, not under the influence of dominant testosterone, ready to work together & get things done.

Maybe the Women in government will finally turn things around re basic/equal rights, and perhaps install some sanity regarding the out-of-control gun problem in the U.S.