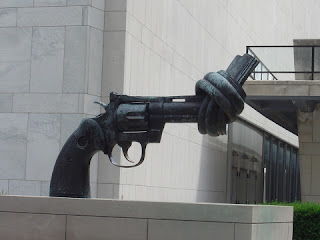 "I'm furious. I will not rest until we have righted the wrong these senators have done."

"Some of the senators who voted against the background-check amendments have met with grieving parents whose children were murdered at Sandy Hook, in Newtown," she wrote in the op-ed.

“These senators have heard from their constituents – who polls show overwhelmingly favored expanding background checks. And still these senators decided to do nothing. Shame on them," Giffords said.

"Some of the senators who voted ‘no’ have also looked into my eyes as I talked about my experience being shot in the head at point-blank range in suburban Tucson two years ago, and expressed sympathy for the 18 other people shot besides me, six of whom died. (End quote)
I applaud Gabby Giffords' truthful wording, the term "Murdered" is used, rather then "an unfortunate incident".
It was murder, cold blooded, mental illness, in some cases preplanned. Senseless, yes. A volatile topic... well, it sure depends on your interpretation of the 2nd amendment. Does the "right to bear arms" mean you are entitled to any & all weaponry available? AK 47 type assault rifles are designed for military applications. They are not useful for hunting, or personal protection. They have been used for mass murder -- even on 6 year old children, & their teachers.
So will this country do something about it? Did you have that "enough's enough something MUST be done" feeling after the Newtown massacre?
Why to politicians go against majority rule, and allow the NRA to dictate policy?
Money.
Quoting from Democracy Now:
"According to a report in 2011 from the Violence Policy Center, between $14 million and $39 million came into NRA coffers in that period. This is probably a conservative estimate. Most of the NRA’s money is still from other sources, the bulk of the money, but the firearms industry has formed a kind of symbiotic relationship with the NRA in recent years—it benefits both."

The longer this debate goes on, the more people are stockpiling guns & ammunition.
The gun manufacturers have become domestic terrorist's best friends.
Im furious too.

If America can't tighten gun control laws after the Sandy Hook Elementary School massacre, then I am forced to conclude there is no hope for this nation.

Good to hear from you~ Yea, how atrocious does this problem have to get, before we do something?

Thanks for ones marvelous posting! I actually
enjoyed reading it, you're a great author.I will make certain to bookmark your blog and will come back at some point. I want to encourage one to continue your great work, have a nice afternoon!

My web-site ... how much should i weigh chart