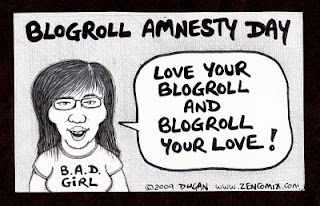 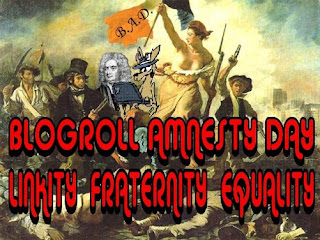 The point of this folly is to give a hat tip to other up & coming bloggers.
That being said I am giving "linky love" to the following bloggers:
• Annette ~ Just my little piece of the world
A nice sampling of news & opinion, fresh off the press, good doses of humor.
• Lulu Maude ~ Take Your Medicine
Queen of photoshop finesse, and a heck of a writer. Edgy & fun ~ Fantastic Feminist.
• DK ~ Redheaded Wisdom
Tends to do in depth writing, with healthy doses of snark & wit.
• Kellybelle ~ Ephphatha
Maybe she should have been a stand up comedian? Kellybelle brings a unique black perspective
to the blogospere, with a slant towards mental health.
• Mauigirl ~ Mauigirl's Meanderings
In a demanding job, sometimes her cat Baxter takes over the keyboard & give his feline take on the two legged ones. That is one introspective cat! Maybe we need catnip awards?

Skirting the edge of the Blogroll Amnesty guidelines~ I am throwing in one more plug. Some may call it a shameless promotion, but I am only one of many writers on the fledgling cornucopia compendium site known as

Siren's Chronicles ~ A rainbow pallet of writers contributing to the blogosphere. Pretty much left leaning, if not an outright radical liberal bent - news, opinion, music, and perspectives on a full spectrum of issues. The folks at Siren's have also participated in Blogswarms- a day where all writers contribute to a particular topic. The Iraq war, and Poverty were two swarm topics in '08. Kind of a fledgling in comment volume, there is good stuff there. Something for everyone!
Posted by Fran at 10:23 AM

The others, I don't know but I will check out. So many bloggers have come and gone over the past two years.

So many blogs-- the idea is to help promote low volume happening blogs. Yay!

The blogosphere is a wonderful place to be!

Thanks for the linky love Fran... I appreciate it.

Thanks for the plug ... but now I feel guilty ... because I've never set up a blog roll. L.A.Z.Y!!! Well, maybe after the magical mystical April 15th date.

A & DK~ So nice to meet you wonderful people of the blog world.

Thank you for including Sirens Fran I heart you for it. ;)

I didn't understand the concluding part of your article, could you please explain it more?