Wrapping your head around the numbers 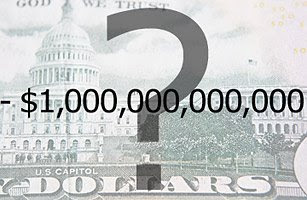 President-elect Barack Obama said the deficit appears on track to hit $1 trillion soon. Speaking to reporters after meeting with top economic aides, Mr. Obama said: "Potentially we've got trillion-dollar deficits for years to come, even with the economic recovery that we are working on."— Jan. 2009
Actually, the deficit is on track to hit $1.2 trillion this year, but what's $200 billion among friends?

Seriously, what is it? To the average person, a number that big probably doesn't mean much. At some point long before the hundred-billion-dollar mark, large numbers simply become figures on the page, well beyond human scale and intuitive understanding.

But that similarity trips us up when it comes time to imagine how those figures translate to the real world, where three more zeros make all the difference.
"My favorite way to think of it is in terms of seconds," says David Schwartz, a children's book author whose How Much Is a Million? tries to wrap young minds around the concept.

The National Debt has continued to increase an average of
$3.36 billion per day since September 28, 2007


--- "Budget Deficit" vs. "National Debt"---
Suppose you want to spend more money this month than your income. This situation is called a "budget deficit". So you borrow. The amount you borrowed (and now owe) is called your debt. You have to pay interest on your debt. If next month you don't have enough money to cover your spending (another deficit), you must borrow some more, and you'll still have to pay the interest on the loan. If you have a deficit every month, you keep borrowing and your debt grows. Soon the interest payment on your loan is bigger than any other item in your budget. Eventually, all you can do is pay the interest payment, and you don't have any money left over for anything else. This situation is known as bankruptcy.

Each year since 1969, Congress has spent more money than its income. The Treasury Department has to borrow money to meet Congress's appropriations. The total borrowed is more than $10,000,000,000,000 and growing. Even when government officials claim to have a surplus, they still spend more than they get in. We pay interest on that huge debt.

In Fiscal Year 2008, the U. S. Government spent $412 Billion of your money on interest payments* to the holders of the National Debt. Compare that to NASA at $15 Billion, Education at $61 Billion, and Department of Transportation at $56 Billion.

The bottom line is We the People are made to pay taxes, taken right out of our paychecks, and there are no allowances for oversights with the IRS. We are in serious trouble... the Feds have to get a grip on the money issue.

Rachel Maddow does a blurb on the National Priorities Project
Posted by Fran at 12:40 AM

This is a sign of how inured we are becoming to large numbers: I am watching a science program about The Universe the other night & suddenly realize the cosmologically large numbers aren't quite so difficult to grasp. We are so screwed!

Interesting vid. It had a pie-chart showing 59% of the budget is for Defense. Hmmmm ... you know that pie-chart included with the 1040 Tax Booklets each year? I just checked & they are only showing 23% for Defense. They also bragged that funding the "Global War on Terror" alone accounts for about 20%. Of course they've been busy cooking the books for this just like for inflation. The NPP figures sound much closer to reality!

Where is this money coming from?

Communist China's economy is slowing and the bully boys in Beijing have instructed the Sino Central Bank to not purchase American debt. Japan is in recession and the EU is troubled too.

So, I guess it means the US will start printing funny money -- a la, Argentina in the early 1970's and/or the Obama administration will ask the American people to institutionalize the debt, meaning purchase the debt with currency not worth the money it's printed on.

Sounds like a house of cards, if you ask me.

It is getting there for sure... scary isn't it..when you see it all broken down like that. But what is the alternative if we don't do anything??

DK~ I remember at some point seeing the "trillion" mark exceeded, and began to struggle with how to even read the number! I like the way they describe the numbers parallel with time- Wow! that really sheds light on it.

As for the official military spending- I think the pie chart with the 23% is the "official" number allocated in the budget. Remember how Bush kept coming back saying, we are gonna need another few more billion....again and again? They made it into a litmus test of "supporting the troops" and level of patriotism. If Congress did not approve these billions, they were literally abandoning soldiers in war. Never mind it was a fabricated illegal occupation, or that Halliburton was given the red carpet treatment to be first in line for war profiteering, or the fact they failed to actually give the troops essential gear they needed (especially the Ntl.. Guard). The amount they asked for kept skyrocketing. I think it was just a numbers manipulation game-- the amount officially allocated, vs, the amount actually spend. Plus I do believe a bunch of the resources in the "other" category- Pentagon, Gitmo etc , get put in sub categories of the budget.
Bottom line: We are so screwed!

Christopher: We know the # is not coming from the ultra wealthy, they have been given tax relief- the ones who least need it, so it is coming from our paychecks. We have been running on empty. In the rel world, at some point the credit card company would cut you off... no more spending. But the Feds just vote to raise the allowed amount of debt.
This house of cards is set to fall, for sure.

Annette: I think a free falling, full blown depression, bottoming out of the economy is the answer.