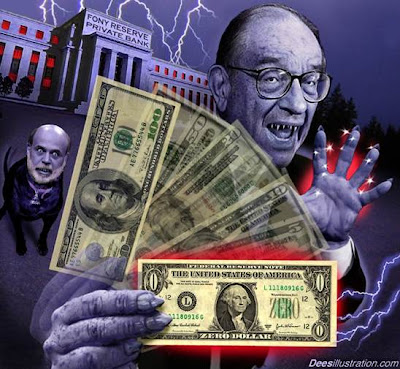 MoveOn is circulating a petition to reverse the free for all Wall Street Bailout money w retroactive rules.
"W"~ the ex-decider did his usual shoddy job & just let the money be mismanaged in a big way - his last gasp lame duck (in)action.

Now Obama & We the People are left with his elephant dung to clean up.
Rather than just wave goodbye to all those Billions of tax dollars, while Wall Street Execs squander the money any damned way they like.... impose retroactive rules.
I think this is a great concept:

Limit Salaries at All Banks Taking Taxpayer Dollars
Wall Street banks distributed $18.4 billion in year-end bonuses in 2008. $18.4 billion to the people who crippled our economy with their recklessness and greed and then took $700 billion of our money.

Congress can apply the limits retroactively, and might even take back some of the most extravagant bonuses at firms that take taxpayer money. A huge public outcry will put them over the edge.

A compiled petition with your individual comment will be presented to your senators and representative.

Ah yes, the $700 billion dollar Wall Street bailout of crooks and criminals and Bush's friends and even family members.

Who can forget the liberal bloggers who frantically wrote of sitting up until 2AM to watch the Asian stock markets open -- quivering in their bones because they to had let themselves get sucked in by the propaganda being sold by Paulson, Bernanke, Pelosi and Frank?

But I won't name any names.

So here we are 7 months later and Obama's economic team led by the Vulcan, Tim Geithner, now wants $1 trillion for the banks. Yep, that's right, $1 trillion.

While I think Obama is 100% correct on his economic stimulus package, I think $1 trillion for the banks is outrageous and a fool's party.

I'm no financial expert, but it was clear there was something seriously wrong, when one of the first things Hank Paulson did was ask for "total immunity, no strings attached, and $700 billion dollars".

Not long after billions were dispersed, did word of luxury parties, plans for swank jets, and generous bonus money began to flow. The answer: It is "industry standard" to have posh parties, and huge bonuses-- NYC even claimed huge bonuses will help the economy!

I see this application of retroactive rules to Wall Street as a step in the right direction. Let's not be lulled into thinking it is industry standard to take billions in taxpayer money. If your bank or financial institution needs to be bailed out in order to not fail, then those standards no longer apply.

The impression I get though, is that one way or another the taxpayers $ will be used- either as a direct bailout- or bailouts- some are double dipping at the trough. If we don't bail them out, then the taxpayers pay in the form of FDIC insured $ guaranteed to be covered up to $250,000 per savings account.

I wondered if several major banks failed, if the FDIC money would quickly be depleted? It was not designed to be able to cover EVERY bank, or the majority of banks, should they fail in a relatively short period of time.

So it is in part the unknowns I wonder about- but certainly making rules apply to the billions already out of the vault, would be a step in a good direction.

I'm not denying anyone's right to observe this unprecedented meltdown unfurl, and wonder what is the correct action to keep Wall Street from doing severe harm on main street ~ especially those already in a vulnerable position. People working 3 jobs to try to keep afloat, knowing if the epidemic of foreclosures continued to spiral out of control
the prospect of being homeless was too close for comfort.

My instinct is to let the banks/lenders who got greedy & sloppy to take their hits- real world real time consequences. But their mismanagement is taking us along for the ride, no matter what action we take.

The rate at which jobs are vanishing, makes me think we are in a vortex of a downward spiral no matter what action we take.

I do like the idea of fixing the previous recent blunder of no strings attached billions bailout.