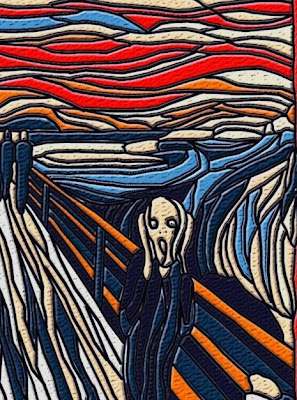 This is nothing the cheer about- the official State of Oregon, March unemployment rate numbers are in- 12.1%, second in the nation only to Michigan at 12.6%.
The Pacific States- Oregon, Washington, California, Alaska & Hawaii- had the highest combined jobless rate of any region at 10.8 %.
This would explain why I am seeing more notices of people holding "medical fundraisers", to help people with serious health conditions, raise money, to pay for medical care.
I saw a line in the weekly happenings paper "Admission $5, students & unemployed, free."
There has just been a wave of things that catch my eye & make me think- Wow! I've never seen that before...
• Foreclosed homes bus tour, 9am, Such & Such Real Estate Company
• “Help in Hard Times: A Forum on Local Services”  @ the Senior Center
For the most part, I try to just forge ahead...don't allow myself to think about worst case scenarios.
Every now & again, I do think about all the people who have lost their homes.... foreclosed.
How so many of them never thought they would get to that place.
Rather than just lie awake at night worrying about the future, we are doing everything we can to run lean, save mortgage money ahead, but those statistics are not helping! Damn!
Posted by Fran at 12:17 AM

Any post with a Munch painting is worth reading...

And OR was recently won The Unhappiest State poll! ... for the factors you mentioned, plus throw in things like high suicide rates. google "Unhappiest State Oregon". But I understand unhappiness is a state of mind expressed at the moment a pollcaller reaches you, so I don't really believe OR is any unhappier than many places ... you are just more honest about it! BTW, I think Nebraska and Iowa won The Happiest States honor.

Excellent stained-glass version of The Scream! Maybe those were the real colors the artist saw when Krakatoa exploded?

DK~ They may have conducted the survey when pollen season was peaking. Just read an allergist recap saying our Valley, because of grass seed farmers & the lay of the land has the highest pollen count in the world!
100 ppcm is high, ours gets to be 1500+.
People who never had allergies before come here & have allergic reactions.
I stay here because it is beautiful. I like the medium sized town feel of it....and because it is a College town, there is a steady stream of diverse speakers & musicians flowing through.
We generally have mild winters, and things are mighty green around here.
We have Mountains, Ocean, Valley, Crater Lake, and at least half of the State is "Blue", politically speaking.
Nebraska & Iowa have CORN!
OK maybe they have jobs too???

Oh Fran: I suspect you're trying to make the rest of us jealous with your *Oregon* as "best" or "most" or "highest" lists as in Oregon has the highest pollen counts, brews the best beers, has the most trees and the highest unemployment.

Dada (in Texas with no frickin' mountains or trees to obstruct our views and no damn coastline bordering on some big blue ocean, and as for the pubs that brew their own delicious beers, well, we long, long ago contracted that out to Bud and Pabst. And we're the first state in the Union to talk of seceding from it! How 'bout dem apples?!)

I must say Dada you get the props in Tejas for the *weridest guvnah* AND the worst president EVER!

At least I hope that's the case, because if we ever had a president worse then W, I'd bail.
Ms Fran would be singing the Canadian anthem.
British Columbia would be my new digs & I'd be forced to learn the metric system.

But the real question is do YOU aspire to be the next King of Texasanistan? Maybe your platform would be a requirement of so many microbreweries per county? 'Cause what goes better with beer, than guns??

• Guns fer everyone! (part of the illegal immigration elimination project)
• Torture fer crimnals (misspellings intended!) George Bush can head that one up- I doubt he will have too many paid speaking engagements.
• No taxes fer nobody

Damn that was snarky!

I read the 75% of Texans are opposed to secession. But I bet some would approve if it came with the promise of *no taxes*.

People who drink Pabst are 'representin'

Oh this ranking of state business is subjective....
Portland is listed as one of the top ten places to live,-- until Mt Ranier blows & paves the streets with lava.
Maybe the reason they have so many microbreweries is the need to cry in our beer over the unemployment rate?

We have all that beautiful coastline, but the water is freezing cold, and the gvmnt took all the Nl Guard & all its equipment to the middle east (I shit you not, every Oregon Ntl Guard plane is in Iraq or Afghanistan). That's another post, I need to write about.

There's plenty to mock here..... one of highest personal tax rates in the nation (no sales tax), yet still running in red ink.... budget deficits.
Rain & pollen & field burning.... cause there is nothing like getting a beautiful, clear sunny day & torching off harvested grass seed fields, to choke the skies with billowing black clouds of sooty smoke. Mmmm, industry in the air!

Pick any state in the union.... we can find issues with all of 'em.