A spot of Tea for Mad Hatter Sarah P ? 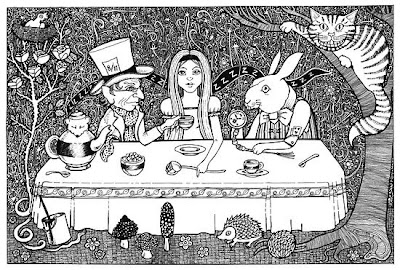 Oh! Look who is coming to Tea!
Mad Hatter Sarah P!
I have been avoiding the topic of Sarah Palin because she is so over the top, and such a has been, I wanted to fast forward to the part where she fades into the sunset & we don't hear from her any more. Ever.
I thought that would be the natural order of things.... after that bang up job she did baffling us all with that whack job resignation speech that rambled on with an analogy about basketball point guards. Even the best of pundits were left asking.... WTF?
But the teabaggers are having a national convention in Nashville on Feb 6, where Sarah P will be the keynote speaker! (IF she does not quit or bail out....)
All the teabaggers will gather there, complete with poorly spelled signage. (Hint! If you are going to call someone a moron, best to learn how to spell the word.) 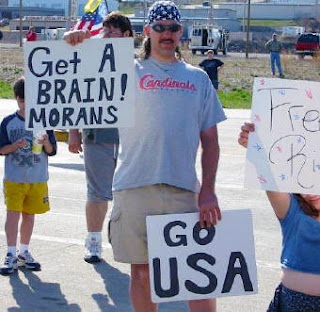 I guess it is befitting she head up the lunatic fringe.
"The Nation" posted these thoughts...
"And should the Tea Party pursue the other route to greater clout -- remaining independent and mounting a third-party bid for the presidency -- history won't be on its side. Taken together, those limitations point to a conclusion that punctures the hype: It could well be that the Tea Party has gotten as big as it can, and will remain simply a (lively) sideshow on the national stage.
Today, according to McKinnon, the main Tea Party darling is Sarah Palin, but many conservatives believe the media-shy former Alaskan governor can't survive the scrutiny and criticism that would accompany a presidential run. Brooks himself, who makes it plain that he's no fan of the Tea Party, has called Palin "a joke" and "a fatal cancer to the Republican Party."
(I disagree with this point. Palin is a media whore... who loves to be in the spotlight- on her own terms. )
I am sure Palin will fit right in, just like a clown loves a circus.
So while others have actual jobs, doing community organizing, and not quitting, Palin can spout off, with new wind in her sails, from the book tour.
Palin is a loser, and a quitter, and now she pals around with douche bags, I mean tea baggers.
The only difference between the GOP "Party of No", and the teabaggers,
the party of "I don't know".
As in "I don't know why I like Palin."
"I don't know what her policies are."
I think being a Mayor of a town of 5000 qualifies someone to be president.
The only important job Palin had was Governor of Alaska, but she quit.
How does one campaign on a *Country First* platform, then shift gears & fail to complete a term in a Government job?
Does this put Profit First ($$$ book deal), or Country Last? Soooo confusing!
Palin's version of leadership equals hypocrisy- making her unwed teen daughter who gave birth before graduating high school, the spokesperson for abstinence. Jawboning about special needs babies, then handing off her down's syndrome baby to her kids to care for, while she pursues greater ambitions. Or as she put it, she quit, so as to not be a "lame duck".
Someone please tell her that ship has already sailed!
Palin's latest folly is to have Alaska bloggers banned from entering the building where she does book signings.
Sarah is all American, go getter, Apple/Moose pie, you betcha', unless you don't agree with her.
When Sarah Palin's in town,
First Amendment Rights are going down!
Click to enlarge the Denied Access list.... 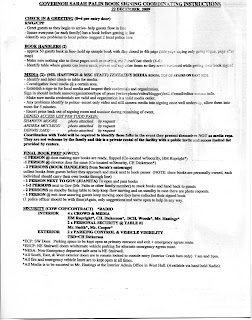 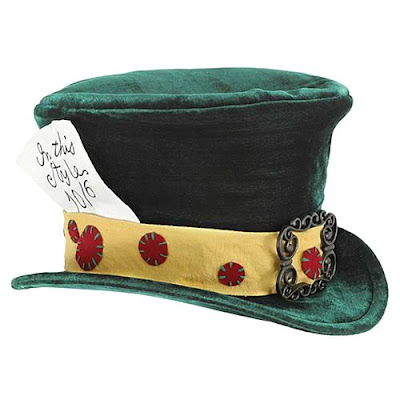 My prediction for McCandy is, she will be Mitt "Wilbur" Romney's VP pick for 2012.

Remember, you read it here first.

Yep, Gryphen was not only put on the list, but he was escorted out of an Alaskan Mall by police just for showing up! He had no protest signs, or tomatoes- in fact Todd P simply said they "might be there to stir things up".
Thus my "First Amendment Rights are going down" remark- the mall is open to the public, and the Palin's should not be able to manipulate whom they allow access, based on their suspicions.

If you are going to be in the public selling goods, then you have to be open to feedback both good & bad.
I'm sick of these staged GOP events where only those who agree are allowed.
Right out of the Rove/Bush playbook.

I predict the GOP will reject Palin- thinking she cost them the election last presidential run, and Palin will be a 3rd party (Party of I don't know?) & will have a strong teabagger following, which will make a lot of noise, but go nowhere.

i can't wait for this sunday's 60 minutes. steve schmidt is going to be on, and he's going to dish the dirt on princess sarah.

Ohhh Nonnie~ that could be fun.
So much dirt to dish.

I had been having a little "Palin moratorium" of my own...... you know the saying "any publicity is good publicity"-- and I think part of Palin;s strategy is to keep her mug in mainstream media-- I mean holy hell, they went nuts when her book came out.

That annoyed me.... that was not really "news" in my book, so I wanted to pull the plug on Palin's mug.... don't give her much juice to keep her coming back for more- amongst progressives.

But alas, the freak show of the teabaggers, and them encouraging her to Run Sarah Run (for prez).... will hit the glaring spotlight for this teabaggers convention.
Who can't at least glance at that trainwreck???