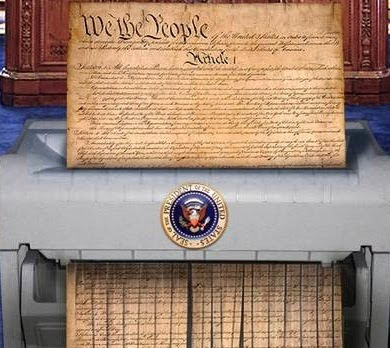 “When government seeks to use its full power, including the criminal law, to command where a person may get his or her information or what distrusted source he or she may not hear, it uses censorship to control thought,” Justice Kennedy wrote. “This is unlawful. The First Amendment confirms the freedom to think for ourselves.”
Thus the Supreme Court ruling that allows Corporations to legally buy votes, by being able to give unrestricted campaign contributions to politicians, as a Free Speech right.
The NYT Reports:
"The 5-to-4 decision was a vindication, the majority said, of the First Amendment’s most basic free speech principle — that the government has no business regulating political speech. The dissenters said that allowing corporate money to flood the political marketplace would corrupt democracy.
President Obama called it “a major victory for big oil, Wall Street banks, health insurance companies and the other powerful interests that marshal their power every day in Washington to drown out the voices of everyday Americans.”
It is considered a broad interpretation of Free Speech rights.
The majority distorted truth by saying the ability to buy advertising & donate large sums of money as an innocent act of "simply engaging in political speech".
What it dose in reality, is give the wealthy Corporations the ability to destroy a level playing field in the political arena. You'd have to be pretty naive to think corporations giving huge sums of money to individual campaign coffers would not have payback expectations in return.
We witnessed this happen in the Health Care Reform process in the Finance Committee.
As more "Wealthcare" money flowed into the pockets of politicians, they changed their votes to opposing just about anything meaningful- and that was WITH finance restrictions.
On its central point, Justice Kennedy’s majority opinion was joined by Chief Justice Roberts and Justices Alito, Thomas and Antonin Scalia.
Justice Stevens’s dissent (opposed to unrestrained corporate campaign contributions) was joined by Justices Stephen G. Breyer, Ruth Bader Ginsburg and Sonia Sotomayor.

So we have 5 GOP Supreme Court appointees, and 4 Democrat Supreme Court Justices.
Justice Stevens was appointed by President Ford, and has served 35 years on the supreme court. He is 90 years old.
We know Bader Ginsberg is in poor health, and is 77 years old.
I hope President Obama already has a team in place vetting potential Supreme Court Justices, because it looks like he may need to make at least 2 more Supreme Court Justice appointments in his Presidency.
Often a Supreme Court Justice will wait until there is a sitting president of like minded political spectrums to retire, as did Thurgood Marshall appeared to have waited till Bush #1 was out of office before he retired during the Clinton Presidency.
One vote difference on these cases makes the difference between a good or bad Supreme Court ruling.
We see how these appointees tip the scales of justice.
Last week's ruling really does feel like we are shredding the Constitution.
"We the People" was just revised to "We the Corporations"