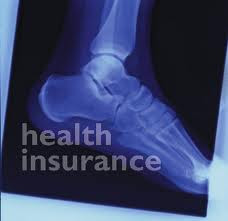 Some components of the Federal health care reform laws will begin in January.  My husband got notice that their company will begin to implement the coverage for "kids" up to 26 years old, early, starting in November. No longer is it a requirement that the young adult be a full time college student, live at home, or have parents cover at least half of their expenses, annually. Allegedly, they will not be able to disqualify pre existing conditions. In our case, adding one child would be $143 bucks a month. That's $1716 a year... but considering the fact a recent 2 day hospital visit will run about $8000 bucks, that's a bargain.
Of course the insurance bean counters are probably busy figuring out ways to add co pays, exclusions & addendums, exceptions, restrictions & any other fine print that will allow them to not pay any or all of a claim- but still having some coverage during these formative years is a huge relief.
Our kids have had health coverage their whole lives, but as they became adults, they could not longer get coverage, and it scared the hell out of me. We all know most young/healthy people don't give much thought about medical expenses, until something happens & the big bills start to flow.

I experienced jaw dropping sticker shock when I saw how much a 2 day stay with little more than IV antibiotics is enough to bankrupt a person. Medical bankruptcy that is.


One American goes bankrupt every 30 seconds due to health care costs.
More than 75 percent of these medically bankrupt families had health insurance but still were overwhelmed by their medical debts, the team at Harvard Law School, Harvard Medical School and Ohio University reported in the American Journal of Medicine.


"The provisions take effect amid a backdrop of two federal court cases challenging the individual mandate that forces people, starting Jan. 1, 2014, to either buy health insurance or pay a fine. Both challenges, one in Virginia and one in Florida, appear likely to move forward, creating the possibility that the law could be altered or deemed illegal by a federal court, maybe even the U.S. Supreme Court.
Further muddying the waters is the possibility that Republicans will earn enough seats in Congress in November to take control. If they meet that goal, then it is likely that they would seek repeal Obama’s reform law consumers’ rights to appeal their decisions,” said Guest.
Two major changes that will apply to all health insurance plans in the individual and small business markets include a ban on the practice of canceling coverage when people get sick and a ban on annual and lifetime coverage limits.
Most consumer protections will kick in at the official beginning of a plan year. Many employer-based plans start in January but some start later. Also, consumers will start hearing the terms “grandfathered” and “non-grandfathered.”  The former refers to plans that existed when the health care reform law was signed six months ago.
The law forces health insurance plans to allow adult children to stay on their parents’ plans until their 26th birthday.  The new requirement takes effect when the next plan year starts. Some insurers and companies voluntarily started offering young-adult coverage earlier than the new plan year.  Parents should check with their plan administrator to find out the exact renewal date.
Health insurers won’t be able to cancel coverage if people become sick or set annual dollar limits on coverage, phased in over three years.
They also cannot deny coverage to children under age 19 with pre-existing conditions or impose barriers to emergency care." 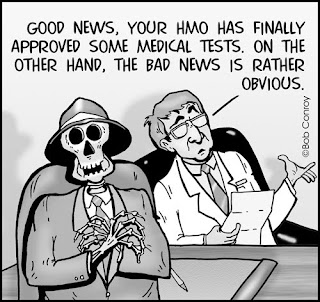 If some GOP or Tea Party "Tax cuts for the rich" idiot causes problems with health care reform, I think I will become quite discouraged. Realizing we did not get a true Public Option for genuine health care reform, but even the shitty watered down measure will get sliced & diced as well.
Look at what a total dog fight it was just to get the scraps of health care reform we did. Clearly the GOP would fight tooth & nail to prevent Universal Health care from ever seeing the light of day  in this country.
Leaving the for-profit model in health care means some schmuck will figure out a way to rip you off
Posted by Fran at 10:47 AM

While the bill didn't go far enough for lots of us, it's a start. I hate to think what might happen if November goes badly.

Sorry, meant to say that I'm sorry for what your son has had to cope with it. I hope he heals and all is well for him and all your family.

Lisa~ Oh my- a nightmare if all the crazies wind up at the helm! I should clarify- even the crazier crazies than the present crazies currently in DC.

The son just had a recheck, he is looking better.
We are hoping the hospital grants him amnesty on his bill.

i don't think (and i certainly hope) that things won't be as bad in november as some people think. even if it does, i don't think the rethugs will stupid enough to repeal the health care reforms. they're using the issue for their election year bullshit, but they won't do anything. they do the same thing when it comes to things like abortion. they had the white house, senate, and house, but they never outlawed abortion. they're really just full of shit.

Nonie~ Can't argue with you there with your accurate summary in the closing line!

the watered-down health care bill was such a disappointment and the fact that GOP/TP'ers would want to repeal even that shows just how far they will go to keep dirty socialism away from our grubby fingers ... except for military adventures, corporate goodies, etc/etc. If it goes to some huge beast's bottom line, they are totally fine with it (just don't call it socialism). If it helps an avg citizen, no!no! they can't tolerate any more of that soshullizm.

I saw somewhere that the big 3 health insureres have already figured a way around extending HC up to age 26. Something to do with them not offering ANY child HC so they are not subject to the rules? that's right, find a legal loop-hole way to circumvent the law, like good fascist bastards ...

They don't even need to repeal if they just keep coming up with stuff like that.

Hi DK ~ I read about insurance companies dropping "Child Only" policies, so people don;t just get coverage for kids w pre existing conditions. You know parents scamming the system to make sure their sick children actually have coverage.

Of course ins companies are the ones running the scams-- they only want to take premiums from healthy people who don't need much in the way of coverage.

We all knew that since health care was still in the hands of the profiteers, they would have the bean counters burning the midnight oil coming up with ways to circumvent the new rules or follow the rules- must provide coverage, but not the spirit-- charge 5 x the rate. Making profit is what they do.

It is not just the ins bastards, but hospitals themselves, as well as big pharma.... they are all in lockstep in this kind of highway robbery scheme. Rip offs all along the way.

Thanks for the layout compliment.... I keep tinkering, they have lots of new/fun choices.

Good point, though sometimes it's hard to arrive to definite conclusions