Some rallies to rally behind! 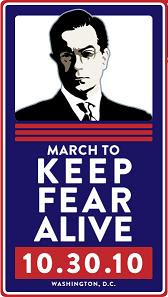 A little dose of sanity to keep us going~

The March to keep fear alive

America, the Greatest Country God ever gave Man, was built on three bedrock principles: Freedom. Liberty. And Fear -- that someone might take our Freedom and Liberty. But now, there are dark, optimistic forces trying to take away our Fear -- forces with salt and pepper hair and way more Emmys than they need. They want to replace our Fear with reason. But never forget -- "Reason" is just one letter away from "Treason." Coincidence? Reasonable people would say it is, but America can't afford to take that chance.

So join The Rev. Sir Dr. Stephen T. Colbert, D.F.A. on October 30th for the "March to Keep Fear Alive"™ in Washington DC. Pack an overnight bag with five extra sets of underwear -- you're going to need them. Because, to Restore Truthiness we must always... Shh!!! What's that sound?! I think there's someone behind you! Run! 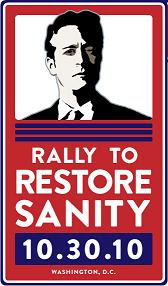 Then we'd like you to join us in Washington, DC on October 30 -- a date of no significance whatsoever -- at the Daily Show's "Rally to Restore Sanity." Ours is a rally for the people who've been too busy to go to rallies, who actually have lives and families and jobs (or are looking for jobs) -- not so much the Silent Majority as the Busy Majority. If we had to sum up the political view of our participants in a single sentence... we couldn't. That's sort of the point.

Think of our event as Woodstock, but with the nudity and drugs replaced by respectful disagreement; the Million Man March, only a lot smaller, and a bit less of a sausage fest; or the Gathering of the Juggalos, but instead of throwing our feces at Tila Tequila, we'll be actively *not* throwing our feces at Tila Tequila. Join us in the shadow of the Washington Monument. And bring your indoor voice. Or don't. If you'd rather stay home, go to work, or drive your kids to soccer practice... Actually, please come anyway. Ask the sitter if she can stay a few extra hours, just this once. We'll make it worth your while.

~~~~~~~~~~~~~~~~~~~~~~~~~~~~~~~
Seriously, if I lived in the area I would love to attend these rallies.
Thanks to both these bastions of truthiness for taking to time to mock all these bullshit rallies, with trumped up attendance, and trying to use historic sites & dates (MLK) to imply their tea party cause is in any way related to the Civil rights movement. Please!
Take that chalkboard & shove it where the sun don't shine Glenn Beck!!!
We need humor, satire & mockery of all this rally cross the country crapola.
Mock away oh ye of sharp wit.
How refreshing!
Posted by Fran at 12:48 AM

I know so many people who are seriously saying they are going to these rallies! One of my blog friends has bought plane tickets to go!

We're thinking of going as well, if the hotels haven't already filled up! Heck, we have free miles on Amtrack, we could go to DC for the weekend from NJ! I think even though these are tongue-in-cheek rallies, it is really important that lots of supporters show up and show Glenn Beck he's not the only one who has followers! And everyone knows the Colbert/Stewart fans are liberals (except for a few nuts who probably think Colbert is for real). I hope we have more people there than Glenn had!

I spent one day building a simple [url=http://seymour8morse.insanejournal.com/1728.html]blogs[/url]. Could you give me some suggestion?

my best friend lives in the d.c. area, and i told her about it. she's thinking about going. i hope she does so she can tell me all about it.

Maui~ Oh I am in total agreement.... it would be fun to attend- of course there will be some good laughs, but the tea party people need to understand they are not running things & see the ridiculousness of their antics.

This is such a breath of fresh air.
I hope you get to go-- I wish I could go!

Nonnie~ Oh! I hope she too is able to attend, I would think it would be a really fun event.
They will get lots of mileage out of it.
The fear & sanity tour 2010..... keepin' it real.

It is really awesome that they are doing this...I loved your writeup too....I think it will prove a point and right before the election the hope is that it will also get the Vote out....esp with young people...son is voting for the first time...and yes, we are going to try to go to this-many on the east coast are trying to go-and many that went to the Oct2nd rally are trying to go to this one as well....