These days, they have so many whiz bang medical interventions, surgeries, procedures, it is possible for Doctors to stop & fail to  and assess whether using all those tools in an end of life situation is reasonable, ethical or compassionate. Obviously, it is a very personal choice. But I have to admit, I've always thought, when I get to that "stepping off place", that I might very well say I'm done with medical intervention. I am going to let nature take it's course. I envisioned myself, instead of being in a hospital all hooked up on machinery, I'd be on a park bench feeding the ducks, enjoying nature, sitting in a forested environment. 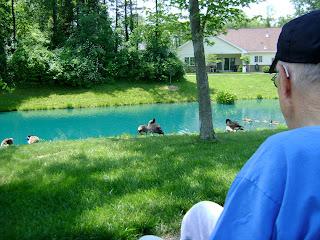 And so it is with Grandpa Mac. Last October he fell and broke his hip. Life has never been the same for him. He did many months of therapy, but many complications set in, and honestly, I lost track of how many times he went to the hospital in the 12 months since then, sometimes major "events" that almost took his life. He was on a medical roller coaster & it was a wild ride. But each complication took a little more out of him. In August, he developed a life threatening infection, that resulted in the Doctors going back into the hip replacement zone & totally undoing the entire hip replacement, in order to get the infection to clear. With the idea that after the infection cleared, they would go back in & redo a new hip replacement surgery. He would lose a year, all that hard work to recover, and be back at square one.  In fact he did not consent to the major surgery, they were supposed to go in & do an interim cleaning up, but once they got in, they determined they had to do the major undoing of the hip replacement.
A few weeks after the surgery, his wife died. Since then Grandpa has decided no more.
No more doctors. No more hospitals. No more surgeries.
So there he is, at the pond, watching the Geese, in the trees. This week, the Care Facility asked if the family wanted to install a feeding tube. This would involve going to the hospital, anesthesia, a surgical procedure. Grandpa is not up for making the decision himself as the hip in limbo status is excruciatingly painful & he's on morphine.
Thankfully, the family is all on the same page. We are respecting Grandpa's wishes. He has stated he is ready to die. He has not had quality of life for over a year now. Worse, he is suffering in pain.
We declined the feeding tube. Putting this in God's hands. Letting go.
No more hospitals. No more surgeries.
He still has a doctor, but not going to Doctor's visits.  Too painful to travel. Yesterday, they determined he is now in renal failure. His kidneys quit working. He has emphatically chosen DNR- Do Not Resuscitate.
This is the final chapter of his life. My son is there with him. he volunteered to be with Grandpa as a promise he'd made to Grandma.  Grandpa would not die alone.
The circle of life will soon be complete. Grandpa will no longer be a prisoner in his body. 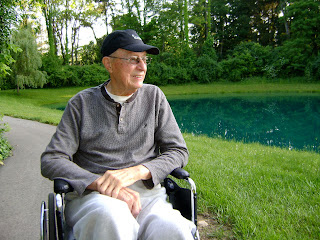 We are holding Grandpa in the light. He is an amazing person who lived his life to the fullest.
One of the most outstanding human beings I've ever met.
He lived a good life, he deserves a good death. Godspeed Grandpa.

Your Grandfather is a very fortunate man to have so much love.

Sending a prayer for GrandPa. and for you and your family as well~

godspeed, grandpa. fran, be very proud of your son. what a wonderful thing he's doing. hugs to all of you.

Dj~ It hurts to let him go, but because we love him, we have to.

Nonnie~ Thanks Nonnie. The son is doing such a kind thing, he's got soul! Very grateful & proud. Also feeling angst about being stuck here.
It sucks to be here when we want to be there.

They have said they only expect Grandpa has about 36 hours to live.
He is in a lot of pain, even though they doubled the dose on the morphine patch to give him constant relief.
Soon he will be free.

Fran: Thanks for sharing this. So sorry your grandfather has had to endure such pain at the end.

This was nicely written and it really resonated with me, having had a couple of experiences of the wonders of modern medicine. While it can work wonders, it can also wreak havoc.

Or to quote an old medical tome I used to believe before experiencing differently: "No one should have to suffer pain."

Our thoughts are with Grandpa, your son, and your family.

Thanks Dada~ Slow going, but close family members are able to say their goodbyes.

Grandpa's room is getting a little crowded. His Sister, a dear friend, both my sons, the fiancee, and two other friends. They are all holding vigil as Mac crosses over. How nice that he is surrounded by people who love him.

Sending good thoughts and well wishes for you all.

i've been checking over here every day. so glad that mac is having such a loving bon voyage party and that your son didn't have to go through this alone. i hope the physical pain is under control and that mac will be at peace soon. hugs, sweetie.

Nonnie~ It was slow going, but Grandpa was surrounded with loved ones, and now he's free at last.