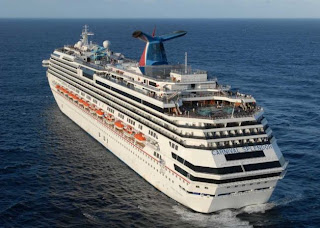 The people onboard the stranded cruise ship Carnival Splendor, after an engine room fire that disabled the ships ability to move, are being towed by MEXICAN TUGBOATS.

They hope to have the ship towed to San Diego.
NOW they are suddenly OK w Mexicans crossing the border?

Perhaps is it because the ships refrigeration system was disabled & they are forced to eat Spam, crab meat, croissants and Pop Tarts, brought onboard by the Coast Guard?


In other weird news~ If it's weird news it probably involves Sarah Palin. 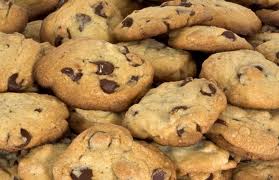 Palin was spouting off in Pennsylvania about how the local government should not be regulating or making decisions about what kids eat. Parents should be making those decisions, she said, and the from the hip, going rogue, Maverick took the bold move of passing out cookies to kids.
Pennsylvania, after all is home to Hershey's chocolate, therefore treats should not be regulated.
(Who cares about the obesity rate of children, and the epidemic of children with type 2 diabetes!)...
Let them eat cookies!
But she also wanted to let the kids in the private school know "how privileged they are".... because the ban would be enacted in public schools.


She also spewed a load about the economic situation, but quickly dumbed it down, by saying people don't ask her about that stuff...... what they really want to know about is Bristol on Dancing with the Stars.  Sarah must be so relieved, because, she shared with the crowd that Bristol said, I can't dance,  & I'm not a star, but sure I'll be on the show. She loaded up the truck & drove to Beverly....
Hills that is. Movie Stars, swimmin' pools.
She actually said "foo foo she she".


I'm not making this up--- listen to it if you can stand it:

While Sarah P slips the kids cookies, the City of San Francisco just made a legal restriction on Happy Meals sold with toys. Because of the poor nutritional value, and the fact they are sold with toys, to bait kids.
Giving your kid a Happy meal burger, small fries & 1% chocolate milk equals 650 calories, 23 grams of fat, and 7 grams of saturated fat.

The new San Francisco ordinance goes into effect December 2011 and “prohibits toy giveaways in fast food children’s meals that have more than 640 milligrams of sodium, 600 calories, or 35 percent of their calories from fat. The law also would limit saturated fats and trans fats and require fruits or vegetables to be served with each meal with a toy.”
“Our effort is really to work with the restaurants and the fast-food industry to create healthier choices,” said Supervisor Eric Mar, the measure’s chief sponsor. “What our kids are eating is making them sick, and a lot of it is fast food. This is a tremendous victory for our children’s health.”
Click here to see their Nutrition information chart for the (Un)Happy Meal line up.


Finally, in our weird news segment....
Keith Olbermann is NOT a corporation (or he would have been allowed free speech in the form of campaign contributions). Keith's 2 day suspension is over.

He apologized for three things:
— "For having subjected you (his viewers) to all this unnecessary drama."
— For not knowing that "NBC had rules about getting permission for making political donations."
— That after he gave money to Arizona Democratic Rep. Gabrielle Giffords' campaign, he had her opponent on the air. "I should have made either it clear that I had contributed to her campaign or better still just dropped (the opponent, Jesse Kelly) from the segment."
Then at the end, Keith used the commentary to make a point about campaign finance laws. If he had given money to the political action fund of a group like the Chamber of Commerce, which then could have donated the money to a candidate, "you would have never, ever known."
Maybe, just maybe private citizens have rights too???
Posted by Fran at 9:24 AM

no, i can't stand to watch it. that woman's voice is like fingernails on a chalkboard. she should have taken her cookies and sent them out to the ship. i can tell you one thing, her daughter bristol certainly doesn't need any cookies. the only contestant on dwts to actually gain weight on the show. that shows you how hard the palin women work.

I can understand the inability to watch & listen to the Queen of the Tea party.... oh though her "charm" is just effing bizarro. First she prattles on about patriotism, then the freedom to eat cookies, and a description of how she wanted to talk about complex economic issues, but Dances w the Stars was the prevailing topic. She cranks up the *'in" factor- like huntin' fishin', wrestlin' lingo.
One is left screaming *make it stop*.
People pay this huckster money to speak???
I could understand paying her money to shut up.

only corporations have rights, don't you know that?!?! ;~D

I heard they opened up 24-hr bar for free drinks for the stranded cruise ship passengers. drowning their sorrows?

as for palin's "speech" ... too much god for me ... would love to see Bill Maher give her the Religulous treatment for saying that she was searching backstage before debating Biden for someone to pray with ... really Sarah, is it really all about finding someone to pray with you? I am oddly comforted by the revelation that apparently sarah and god are not on a private conversation level ... yet!

Lib~ Ooops! I forgot there for a moment.

DK ~ They had to wait on giving out free alcoholic drinks till they got the toilets up & running, or that would have been a pisser?

Palin's speech--- how about her saying she wanted to talk complex economic details, but "Amerikkinzzz" just wanted to know about Dancin' with the Stars!

Good point about not having an inside connection w god-- like Bush claimed to have had.
Can you believe these idiots (Bush & Palin) can sell books?? Either that or he made deals w Cheney & Jeb to buy a shitload so they appear to be selling. I would not house train a puppy on the pages from either of their books!