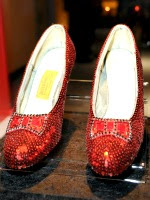 What would you wish for if you had the magic of Dorothy's ruby slippers?
The real ruby slippers from 'The Wizard of Oz' for sale
The actual ruby slippers Judy Garland clicked together to send her character Dorothy back to Kansas in "The Wizard of Oz" are to be auctioned off in December.
Replicas and stunt shoes have been sold off in the past, but now bosses at California auction house Profiles in History have acquired the most famous footwear in Hollywood.
The slippers will be the highlight lot at the three-day Icons of Hollywood auction, which will take place December 15-17.
A spokeswoman for the auction house says, "There are four pairs of screen-used ruby slippers known to have survived the 70 years since the making of 'The Wizard of Oz.' One pair is the centre piece of the Icons of American Culture exhibition at the Smithsonian's National Museum of American History and is one of the most asked about artifacts at the museum.
"So viewed are these slippers that the carpet in front of them has had to be replaced numerous times due to the crush of shoes that have brought visitors from all over the world to see their glimmer.
"Another pair was unfortunately stolen from the Judy Garland Museum in Grand Rapids, Minnesota, and will likely never be recovered. The third pair is in private hands and will not be reaching the market any time soon.
"The final fourth pair up for auction are marked on the inside lining '#7 Judy Garland' and the leather soles are painted red on the bottom. The lack of felt, in addition to light, circular scuffs evident on the soles indicate their use in the extra-close-up or insert shots when Judy Garland taps her heels together at the film's climax.
"Their condition is near mint and it is also believed that this beauty pair was placed on the protruding feet of the Wicked Witch of the East after she was squashed by Dorothy's house since they exhibit slightly higher heels and the bottoms of the shoes were exposed to the camera. This pair has exhibited at the Smithsonian."
Posted by Fran at 1:04 AM