Here is the menu campus republicans are serving up at the University of California Berkley: 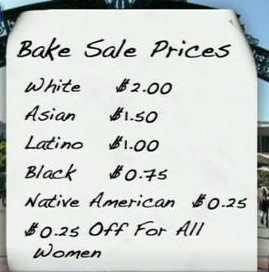 Local station KGO reports:
They've developed a sliding scale where the price of the cookie or brownie depends on your gender and the color of your skin.
During the sale, scheduled for Tuesday, baked goods will be sold at prices according to ethnicity & gender
"The pricing structure is there to bring attention, to cause people to get a little upset," Campus Republican President Shawn Lewis, who planned the event, told CNN-affiliate KGO. "But it's really there to cause people to think more critically about what this kind of policy would do in university admissions."
Lewis says it's a way to make a statement about pending legislation that would let the California universities consider race or national origin during the admission process.
But the young Republicans have been on the receiving end of a fierce backlash. Reaction has been so negative they've been forced to cancel their customary lunchtime tabling duties."
I'm guessing the campus republicans have not a clue what it is like to live in poverty. Wish they could go live on an Indian reservation, or on the other side of the tracks in a predominantly Black or Latino impoverished neighborhood. When you live in poverty, there is no way to afford college. People  are already working a few jobs just to make ends meet.

Here is a glimpse of tuition costs for UC Berkley 2011-2012.
Here is another thing the campus republicans need to consider:

People who have higher educations, generally wind up with higher paying jobs, and therefore contribute back to the community more.  If you leave people without higher education, and they remain in poverty, it is more of a strain on the community.  Since republicans are so hell bent on not paying taxes, allowing poor people to get a break, and an education will ease their perceived tax burden. If they can break away from the I*me*mine mentality for just a moment, they just might realize that the greater good of family wage jobs, happy, healthy people is a sound investment. 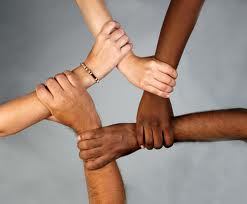 What would they prefer? Only wealthy white people attend college, so they can build more prisons?
Having a college age kid myself, believe me when I say they scrutinize the tuition/financials big time. If there happens to be an oober wealthy family in any gender or race, they will not get financial aid or breaks.
The NY Times reports:
Two-thirds of bachelor’s degree recipients graduated with debt in 2008, compared with less than half in 1993. Last year, (2010) graduates who took out loans left college with an average of $24,000 in debt.
We know that there’s some scarring to cohorts who graduate in bad economies, and this is the mother of bad economies.”
This is a prime example of the a party of no mindset. The rich white kids sniveling because they don't get special breaks those struggling might get.
Reminds me of this quote:
Those who want to throw the burning coal of resentment, wind up burning their own hand.
Posted by Fran at 11:56 AM

it appears that young rethugs are just as tone-deaf as the older ones.