LITTLE OLD LADIES FEARED BY B OF A 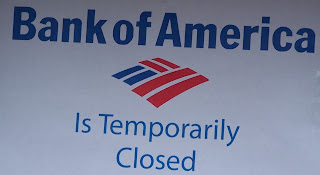 WITH WALKERS, WHEELCHAIRS, AND PORTABLE OXYGEN TANKS...
A group of senior citizens who call themselves the "Wild Old Women" in San Francisco shut down their local Bank of America branch office earlier this week when they arrived to demand "the bank lower fees, pay higher taxes, and stop foreclosing on, and evicting, homeowners," in what they called "a run on the bank." The women ranged in age, from 68 to 80 years old.


“We’re upset because the banks are raising their rates because it really affects seniors who are on a fixed income.”

As they arrived, Bank of America closed and locked its doors, to the surprise and delight of the elderly protesters, who said that they had no intention of storming the bank.
The women waved signs, but didn’t march or chant, with one woman on supplemental oxygen adding that the group was too old for that.