YET ANOTHER FEMA F#@K UP 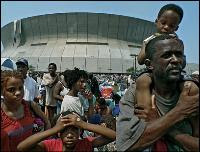 FEMA IS SENDING OUT NOTICES TO HURRICANE KATRINA VICTIMS- 6 YEARS LATER, THAT THEY WERE OVERPAID EMERGENCY FUNDS, AND TO REPAY THEM, ON AVERAGE, $4,622 EACH.

<---------- THE ASTRODOME NIGHTMARE
A LAST MINUTE EMERGENCY SHELTER
LACKING BASICS LIKE WATER, FUNCTIONING TOILETS, AND MEDICAL SUPPLIES. IT TOOK MANY DAYS FOR FEMA TO EVEN BEGIN TO RESPOND.


"FEMA is asking more than 83,000 recipients of aid to reimburse the government an average of $4,622 each, BlackAmericaWeb reports. The agency says that clerical or employee errors may have resulted in some
victims receiving more compensation than what may now be allocated.
At least one elected official agrees. "Disaster victims shouldn’t be punished because FEMA is dysfunctional," said Louisiana Sen. Mary Landrieu, rejecting a claim made by the agency that it is required by law to recover all improper payments, even if the recipient was not at fault. "Most of these families facing recoupment are honest survivors facing incredible challenges who used the funds for legitimate and urgent disaster-related needs.
She has recently introduced and sponsored a bill since signed into law by President Obama that would allow FEMA to waive many of the debts now burdening the already afflicted. Hopefully it will do so.
Instead of chasing down money from people who had no role in whatever errors were made, and almost certainly aren't in a position to repay, FEMA would be much better off preparing to avoid repeating the errors it made in its response to Katrina."
FROM THE ROOT


FEMA IS SUPPOSED TO BE EMERGENCY MANAGEMENT.
WE NOW KNOW THE "M" STANDS FOR MISMANAGEMENT.

Oh, I AM SURE that all the disaster survivors have several thousand dollars lying around just ready and waiting to turn over to the government! Not a problem! :-/

PEOPLE WERE LEFT W NO OPTIONS TO EVACUATE, THEN AFTER THE FLOODING, DAYS OF DELAY, THE ASTRODOME DEBACLE, AND 6 YEARS LATER PARTS OF THE LOWER 8TH WARD ARE STILL AN ABANDONED WASTELAND. BUT THIS GOVERNMENT WOULD RATHER GO AFTER TRUE NATURAL DISASTER VICTIMS, THEN LET THE RICH PAY THEIR FAIR SHARE OF TAXES.
STILL, THIS WAS A G W BUSH DOUBLE DISASTER AND THE DAMAGE HE DID (OH THE LIST IS LONG!!!)
JUST KEEPS ON GOING.

I HOPE COLLECTIVELY, FEMA DOES NOT GET BACK ONE DIME. IF ANYTHING THOSE SURVIVORS ARE OWED FOR PAIN & SUFFERING.