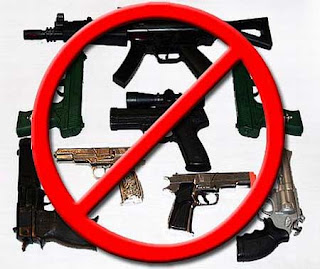 NRA has a seven-step plan
The National Rifle Association has the formula spelled out exactly:
1) Work hard to get high-powered weapons and unlimited amounts of ammunition into the hands of anyone who asks for it.
2) Encourage legislation to allow those weapons anywhere and everywhere in our society.
3) When the inevitable massacre happens, hunker down.
4) Release a prepared message saying the NRA is “praying” for the victims and their families.
5) Blitz the media with the message that now is not the time to discuss gun control, for to do so would be to politicize the tragedy.
6) Intimidate any politician who dares to speak against this madness.
7) Go to step one, repeat as necessary.
JIM SCHMIDT

Painfully, this editorial is all too accurate.
They added flying flags at half mast to the routine... but so far  Illinois Governor Pat Quinn is the only politician stepping up to address the issue.

The Chicago Trib reports:
CHICAGO (Reuters) - Illinois Governor Pat Quinn on Tuesday proposed a state ban on assault weapons in the aftermath of the July 20 movie theater massacre in Colorado in which a former graduate student is charged with killing 12 people with guns including a semi-automatic rifle.
Quinn, a Democrat, called himself a "strong supporter" of the constitutional right to bear arms, but said in a letter to state legislators that the proliferation of military-style assault weapons undermines public safety.

That formula does nail down their strategy to a tee unfortunately. And we the sheeple are so stupid as to buy into it.

I dislike that either major party presidential candidate is willing to *do anything* about it....
it's all about getting elected.

Pat Quinn deserves a "Spine Award" from the Backbone campaign.

Romney & Obama deserve a *Spineless Citation*.
for their lack of responsive action.