The right for same sex marriage has landed in the Supreme Court-
Humor me & take a walk down previous Supreme court rulings--
* note some of the verbiage has been changed to reflect the current court case:


"it is simply not possible for a state law to be valid under our Constitution which makes the prohibition of marriage dependent upon sexual orientation, or gender of those wishing to be legally married.

PBS News hour has some good discussion, but basically one speaker from the "Alliance for American Freedom (to discriminate", want to keep this a state by state feud.
I contend it is not good enough to have this mish mosh of marital recognition, and would it be acceptable for the hetero crowd to have their marriages not honored natiowide. Cross the state line, lose your marital rights, how is that OK?

Note in the below graphic--- Maine & Maryland have been added to the "gay marriage is legal" list. 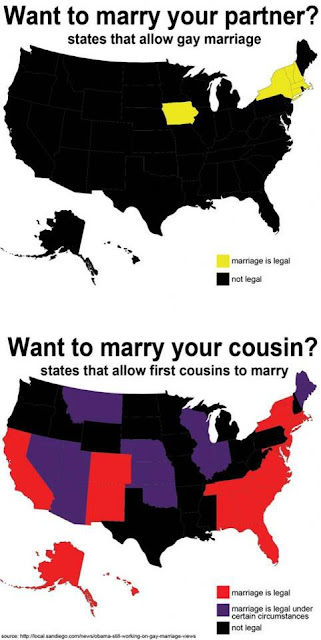