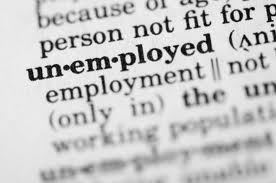 "The unemployment rate dipped to 7.7%, as 12 million workers were counted as unemployed. The drop was partly because more people said they got jobs, but also because 130,000 people dropped out of the labor force."

Way to manipulate the data!  The unemployment rate is lower because 130,000 people are no longer counted. 10,000 government jobs were lost & as the sequester kicks in, more will lose family wage jobs. Teachers & government workers will be hit hard.

14.3% are unemployed or "underemployed"- working part time in order to work at all. The 14.3% is considered by many to be closer to the real number.

In our family, we've got 2 out of 3 unemployed.
Both college grads w a degree.
One w 28 years of experience, the other fresh out of college.
Both seriously looking for work.

The local school district is holding special meetings to let staff know to brace for big cuts- in the form of a $10 million dollar shortfall. They announced they are closing school health clinics, but will add a few centralized nurses. A school nurse w no funded clinic... how does that work exactly?
The public college is also announcing a big loss of research funding, & the county here is already releasing prisoners wholesale because of budget shortages- that is expected to get worse. 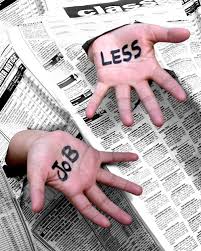 "About 40% of the unemployed have been without a job for at least six months. The average length of unemployment now lasts nine months.
At 13.8%, the unemployment rate is highest for African Americans. Young people are also struggling. Workers ages 20 to 24 had a 13.1% unemployment rate in February, and for teenagers ages 16 to 19, it was 25.1%
Education still makes a big difference. The unemployment rate was only 3.8% for workers over the age of 25 with bachelor's degrees, whereas it was 11.2% for high school dropouts."
The classifieds are looking mighty sparse, and there seem to be a plethora of underemployed positions-- the $10 an hour job, before taxes & such are removed. NOT a living wage.
They can put lipstick on the unemployment pig, & tweak the numbers, but those of us with family members living in the reality of unemployment, splashing headlines of better times does not quite hit home.  Furthermore, most employers in this sector charge an additional $300 a month to add a spouse to your workplace health insurance... of course co pays are an additional charge.
For now, the college grad can still remain on a parental health ins plan, but once that ends, we can no longer afford health insurance for him , even though he is eligible.
The prospect of no health insurance coverage scares the hell out of me- for any family member. Even though those family members are healthy (thankfully), things can happen & not having coverage can bankrupt you in no time.
The whole scenario seems like mighty thin ice. I feel the pressure of being the only employed one, like I must really tow the line at my job, because it is the only one "we've got". It is a heavy load to carry, right now. The fact that there are a series of budget axes about to fly in the next few months, extended unemployment benefits are always on the chopping block- right at the time when we really need them.
A new development is the length of unemployment benefits is determined by the % of individual state's unemployment rates. These manipulated numbers can change all that. even though they do not reflect real unemployment rates.
A word of wisdom to those getting unemployment-- best to have them take taxes out of your unemployment up front, or you may be hit with a tax bill you can;t pay down the road.
Seems so unfair they tax unemployment as earned income- albeit about approximately  1/3 or so of what your previous wage was.  If you wind up being unemployed longer than you had hoped, this can create a downhill spiral, having to delay or defer taxes owed, adding interest & penalties to the tax debt. 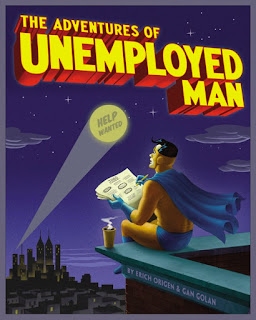 As a glimpse into the job situation- there was an ad for a dog walker-- but they required years of experience!


"Employers have been adding jobs for three straight years, but still, it's happening too gradually for the labor market to return to where it was at the beginning of the Great Recession.
Overall, the U.S. economy has only gained about two thirds of the jobs lost in the financial crisis. "

So don't believe everything you read about the new & better unemployment rate.