he's got the rifle, I've got the rack 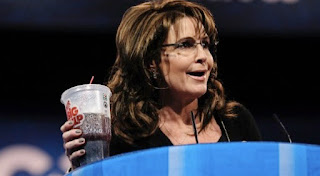 Notice the Big Gulp is about as big as her head!

In all her glorified ignorance, Palin took to the podium with one of those giant Big Gulp soda drinks.
For a while she just took swigs of it, from a straw, and remarked "We're cool. Shoot, it's just pop with low calorie ice cubes in it. I hope that's OK."
One could argue government intervention can overstep, but Palin misses the bigger picture-- as when they changed the school lunch program, she spoke at a school and passed out cookies to everyone.
She may think that she is perky, but she misses the epidemic of childhood obesity & very early onset diabetes.
Someone is doing something about it, Ms. Palin, whose management style leans towards "when the going gets tough- she quits"

Bloomberg put through a no trans fats oils mandate in restaurants in NYC, and he wanted to put the kabosh on the swimming pool sized soda servings. 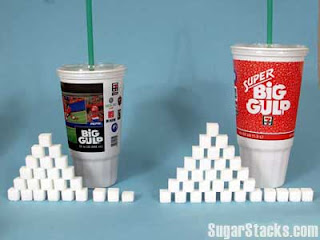 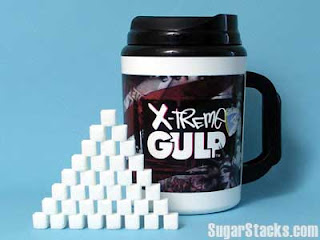 About the size of a gallon jug 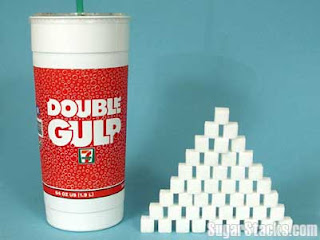 So Palin may think she's being cute about the topic, but she is woefully out of touch. She is an armchair spectator... likes to criticize others, but could not even finish her term in office.

When Palin is at the podium, or her mouth is moving, you can expect zingers-- here are some "gems":

Rove came under fire from a number of speakers from the main stage, including Palin: "If these experts who keep losing elections keep getting rehired raking in millions, if they feel that strongly about who gets to run in this party, then they should buck up or stay in the truck. Buck up and run. The architects can head on back to the great Lone Star State and put their name on some ballot, though, for their sake, I hope they give themselves a discount on their consulting services."

That's Palin's brand of folksy "word salad" Buck up or stay in the truck.
It is just those kinds of off the cuff, brain droppings that make even the most conservative of voters cringe.

Other snippets:
• evangelize a grass-roots, anti-Washington message to all Americans
• It's imperative to reach out and to share that conservative message of liberty and less government and lower taxes

Right! because lower taxes for the rich has not been on the agenda??

• We're here to restore America and the rest is just theatrics

• an anecdote about her husband buying her a rifle rack for Christmas, while she bought him a gun.


"This go-around, he's got the rifle, I've got the rack," she said. (OMG! This begs for a parody country folk song)


•  "And background checks, yeah, I guess to learn more about a person's thinking and associations and intentions? More background checks?" she said. "Dandy idea, Mr. President. Should have started with yours."

* As if the background check concept is not related to the mass murders by people who are mentally ill.

• "Now is the time to furlough the consultants, tune out the pollsters, send the focus groups home, and toss the political scripts, because if we truly know what we believe we don't need professionals to tell us," she said, adding one final message to Washington.

In closing, I think it is good Palin thinks she does not need professionals to tell her anything. Because the more she  speaks randomly, the more she is likely to be comedy fodder than a serious candidate or contender.