Watada's War is Over

Lt. Ehren Watada was the soldier who announced he refused to deploy to Iraq, based on the Constitution he swore to protect.

First Lt. Ehren Watada, the first commissioned officer to publicly refuse to deploy to the war in Iraq, has finally ended his long legal battle with the military. Watada
refused to deploy to Iraq in the summer of 2006 with his Stryker brigade because he believed the war was illegal, saying at the time, “I am wholeheartedly opposed to the continued war in Iraq, the deception used to wage this war, and the lawlessness that has pervaded every aspect of our civilian leadership.”

Watada offered to be deployed instead to Afghanistan or to resign, but the Army refused. His court martial for missing his unit’s deployment ended in a mistrial in February 2007, and a federal judge ruled a second court martial would be double jeopardy. The Army also threatened to court martial him for “conduct unbecoming an officer” for appearing at anti-war rallies and speaking out against the decision to invade Iraq. If he had been convicted on all counts, he could have served six years in prison and been given a dishonorable discharge.

Watada has been working a military desk job since the mistrial. He was supposed to have been discharged in December 2006, but his legal proceedings prevented that. The Army accepted Watada’s latest resignation on Sept. 16, 2009, and he was discharged the first week of October, under “other than honorable conditions.”

Watada’s attorney told reporters that he felt history would treat Watada "more favorably" than the Army had, calling him “a hero and a patriot." 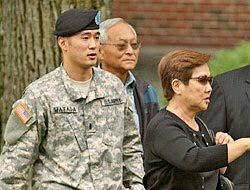 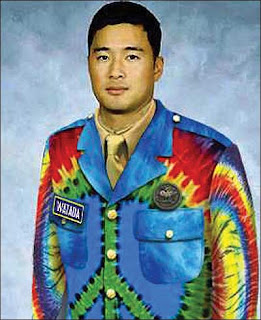 Ehren Watada lived in limbo for almost 3 years past the end of his contract.
He lived off the base, but he was required to report "for duty", even though his clearances had been stripped, so there was not much for him to do. With the trial botched by the military, they basically held him "prisoner" in the military, unable to move on with his life-- until now.

On a personal note, his folks were at the Peace rally this weekend- commemorating the 8 year anniversary of the Afghanistan war..... they looked so happy that Ehren is now Free.

What Lt. Watada did was brave and very much so honorable.
I salute his courage to uphold the Constitution, and the oath he took.


Lt. Watada deserves a Nobel Peace Prize. He was willing to put his personal freedom, (faced 8 years of jail time),and entire military career on the line to "do the right thing", and follow his moral compass.

Labels: Salute to a Soldier who pursued the Noble Cause

The 2nd video is long, but he speaks the truth about having a War of Choice, and our collective moral obligation to not let the Government run amuck.

This man is a visionary, and has great wisdom.

I have so much respect for him.

this is a profile in courage, as far as i'm concerned. best wishes to lt. watada.

As I've blogged before, Lt. Watada is an example of a REAL military hero. He's the kind of officer I would follow into a combat assignment, because if he's going there it must be a legitimate war, not a trumped up illegal one. I only wish we had thousands and thousands more like him because maybe we'd have a few less wars.

Pretty amazing, Nonnie, he can spend the rest of his life looking into the mirror knowing he refused to be a pawn for Bush & took a stand.

Dada: I really thought when he made the announcement, that Iraq is an illegal & immoral war & based on his Oath he could not go to Iraq- that he had opened the floodgates to others making the same declaration.
Lots of other soldiers have gone AWOL, but they took their stand silently.

It was the idea "What if they threw a war & nobody came".... because really it takes soldiers to carry out the wars of the government.

The other thing about Watada, an Eagle Scout, was they the trial started-- al they could come up with were glowing accolades of his exemplary service.... they could not dig up any dirt on him- to they went after a speech he made @ the Veterans for Peace gathering.

He showed up in court & said, yes, I concede I said what I said. They wanted to nail him on speaking out against Bush.

They botched the case & wanted a restart or do over, but created a double jeopardy.
The jury had been selected, and testimony was underway.

The military court threw out the double jeopardy argument. So they took it out of military court to a Federal Judge.... who was an ex military guy-- but he agreed they could not start a new trial (as the original judge threw out the case & wanted to redo the charges).
that would have been trying him a 2nd time for the same alleged crime-- double jeopardy & the case was dead in the water.

Not surprisingly, they had to take it out of a military court to get justice.

I am just so relieved.

I have had the opportunity to hear Ehren speak @ local rallies & his folks are avid, steadfast dedicated Peace activists.

Can't wait to hear him speak again.
I hope he writes a book.

This is an example of awesome courage and resolve. I wish I could be worthy of being a pimple on his ass, (a gross analogy, I know, but you get my point). My courage was tested at the recent reunion in Seattle. I wouldn't allow conversation at the table where I was sitting to turn to politics. I told them that we didn't have these conversations when we were over there, we didn't need to separate ourselves by having them now. All agreed. I knew I was in a minority at such an affair, but I had to go to this reunion at least once. Now that I have, I'm over it.

Congratulations to Mr. Watada. I hope this sheds a light into the brains of those that want to continue the carnage.

Spado~ Glad you held your own. that gathering sounded like a bust-- too bad you were not able to connect w folks you knew.
At least you did not let it get into a Fox newz brawl.

I am still stunned that Watada stood alone in his assessment that the war of choice in Iraq was illegal.

Sadly I hear many are choosing the military now because of economic hard times-- not because they believe in the mission.

It will be interesting to see what path Watada chooses to take now that he is free. I know he has spoken @ Veterans for Peace rallies.
He's a very soulful person & an inspiring speaker.