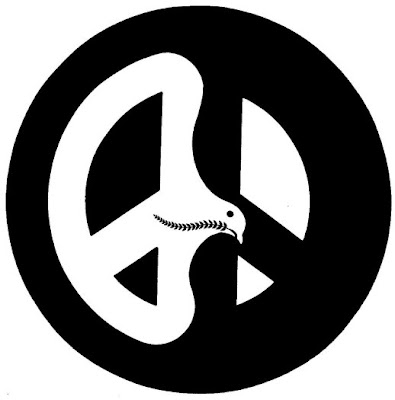 I was surprised this morning to read that President Barack Obama had been awarded the Nobel Peace Prize.
From MSNBC:

"The widespread reaction, however, when the stunning news hit the nation was: For what?

Obama said so himself. "To be honest, I do not feel that I deserve to be in the company of so many of the transformative figures who have been honored by this prize."

Nobel committee members revealed that they fully intended to encourage, not reward. Consider this: The nomination deadline was only 12 days after Obama first entered the Oval office.

It's an enduring myth that the prize is only about accomplishment — it actually was created as much to supply momentum for peace as to celebrate it.

Indeed, with a leftist slant, the five-member committee was applauding Obama as much for what he's not — his predecessor."

Ironically, there is a rally planned here this weekend, with this theme:

WAR WILL NOT BRING PEACE TO AFGHANISTAN

Indeed people are still fighting, suffering & dying in both Iraq and Afghanistan.

When I look at Obama's "accomplishments", they pale by comparison to the magnitude of others-- like Martin Luther King jr. for instance. The personal sacrifices he and his family made were monumental. Enduring death threats, having his home with children in it firebombed. He was jailed, held fasts, and worked tirelessly for Civil Rights.

The cynic in me questions how can Obama be worthy of such a high award, while he has chosen to not totally withdraw troops from Iraq, chosen to not shut down Gitmo, has even allowed some of the vile practices of the Bush administration to go on- warrantless wiretapping, and most troubling, the perpetuation of two wars.

The same week Obama is poised to approve sending 40,000 additional troops to Afghanistan, he is awarded the Nobel Peace Prize?

If the intent is to encourage President Obama to make bold and brave moves towards peace, than I can't argue with that. But let's be honest-- they are giving a very high honor to a man with a very long "to do" list.

Including, but not limited to:

• Not engaging in wars- use the diplomacy he talked about in the past.

• In my heart, I do think it is our moral duty to prosecute the crimes of the Bush administration. These were grave human rights violations. As a country we need to address the crimes to hep us reset our moral compass, as a Nation.

It feels like the horse is before the cart here.

The award ribbon given, before running the race.

Congratulations, President Obama, I wish you the best to step up, and earn this Nobel Peace prize.

Yup he definitely needs to earn this one. Afghanistan would be a good start!

Remember Kissinger got one just for announcing he was putting together a peace talk plan w/Vietnam. Those peace talks drug on for many years, meanwhile the war raged. Was the Nobel panel trying to push him in a peaceful direction? perhaps.

I do think the "prize" points out how differently the rest of the world sees Obama (and us!) than we at home who have to take the day-in-day-out bludgeoning of dreams delayed, dreams unaccomplished, dreams tabled and/or killed.

I also think the "promise" of Obama was much on the minds of the Nobel panel. Our image in the world has changed. The President of our Country has been awarded a Nobel Peace Prize. Now we as a country need to actually walk the walk, not just talk the talk. Obama is a great mouthpiece, but the actual accomplishments will come from the us all.

Obama is the Commander in Cheif, so he does call the shots to pull troops out.

What is he waiting for???

Show me the Peace!

Exactly what I was thinking. He needs to end the wars in the Middle East, or at least, our part in them. He needs to close Gitmo and not create another prison in Afghanistan instead as well.

The head of the committee that awarded Obama the NPP said the field was rather thin, so Obama was chosen based on for his statements about nuclear disarmament, etc.
Now, if I were in a decision making position and received the NPP, I think I'd feel obligated to earn the damn thing.
If I were Obama, catching all the hatred from the right as it is, I'd bust a move and end the wars, negotiate with all world leaders and also make a stand on Palestine becoming a state.
Let the right's heads explode.

Lib: We need to have times in our country we are NOT at war. We are darned near bankruptcy... on so many levels, yet they still give the stamp of approval to fund wars.

KZ ~ Let's hope Obama DOES both step up & feel obliged.
I would be thrilled if he just brought the troops home. Learn from MLK jr & do the non violent thing.

The GOP heads exploding even now is icing n the cake.

Most of our troops are still in Iraq, and all the mercenaries are. Obama should have put a stop to that months ago.