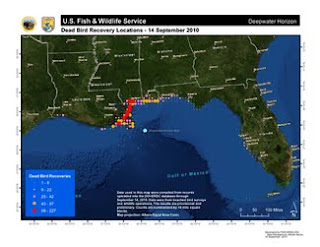 These daily counts continue to rise. The media has moved on from the oil spill story, but it has not yet ended. It does not take a Wildlife biologist to figure out the "dead zone" is closest to the spill zone.


Remember all that hocus pocus chemical dispersant that magically made the oil disappear?
Well maybe not so much-- looks like there is what has been dubbed a slime highway-- yea folks, it looks like that oil did not disappear, but it is down at the bottom of the ocean floor. As you might have guessed it is not benign either... 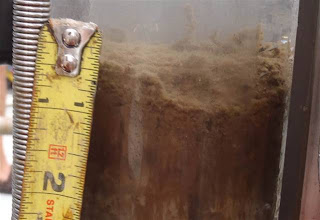 "Samples taken from the seafloor near BP's blown-out wellhead indicate miles of murky, oily residue sitting atop hard sediment. Moreover, inside that residue are dead shrimp, zooplankton, worms and other invertebrates.

"I expected to find oil on the sea floor," Samantha Joye, a University of Georgia marine sciences professor, said Monday morning in a ship-to-shore telephone interview. "I did not expect to find this much. I didn't expect to find layers two inches thick."The scientists aboard the research vessel Oceanus suspect it's all from the BP spill, but will have to wait until they return to shore this week to confirm it's the same oil source.
"It has to be a recent event," Joye said. "There's still pieces of warm bodies there."
If it is BP oil, it could undermine the federal government's estimate that 75 percent of the spill either evaporated, was cleaned up or was consumed by natural microbes." - MSNBC reports.
Click here to read the full article.
The Government is now requiring 3,500 unused Gulf wells to be permanently plugged & the dismantling of 650 unused platforms. What a mess!
Posted by Fran at 11:47 PM

I agree, it ain't over. I don't understand why the mainstream media is promoting this fantasy that the oil just kinda disappeared. If it did it would be the first time ever.

i don't think it will be really over completely in our lifetime. there will be ramifications that nobody will even realize for decades.

The latest headline is they capped the well from the other side. Good they did, but let's not forget the hell they created & see the results of the grand experiment w all that chemical dispersant.
Even CNn published a report of 3600 dead birds.
Just got the story a few thousand less than the Fish & Wildlife website has posted.

Thing is, those numbers keep on growing.
Damned shame too.

There is no way all that oil just disappeared! And as others have noted, we will be suffering from the consequences of BP's oil gusher for a very long time.