A Pledge to America 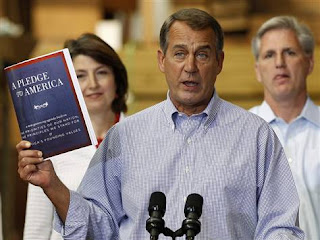 Remember those great publications the GOP put out in the last few years-- The budget proposal with no numbers? The Health Care reform plan with blank pages?
Now comes "A pledge to America". Your 21 page manifesto of what the GOP has to bring to the table.
Notice John Boehner  went all out with the theatrics here by rolling up his sleeves?
Or is that because it is easier to golf with sleeves rolled up??
Never mind. That's not the point. The point is that the GOP wants us to join their bandwagon. Suddenly they promise to focus on creating jobs.
Hey people Boehner & his pals need golf caddies, and shoe shine boys.
They want to "take back our country". They did not answer the question just how far or how much.... back to the stone age, or just back before employees had no rights, and Wall Street had no regulations?

They just don't finish the sentence-- take back our country-- for the rich.
Just look into the Billionaires for Social Insecurity Clip: 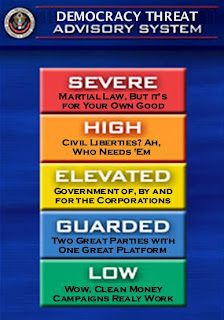 So you see, the GOP is there for us when we feel the need to be screwed.
The only jobs they created in the last decade were those that shipped off to Iraq & Afghanistan-- and that includes you too National Guard!

Filled with the same tired rhetoric with glistening new ideas, the GOP will slash taxes (never mind slashing taxes & recklessness brought us a $13 trillion dollar debt).
Oh they promise to also slash spending on social programs, and one of our all time favorites.... cut down on Government regulation. Because really, that whole deregulated Wall Street thing went SO well. (For the fat cat bankers, who screwed up big time, then were handed the key to the Federal treasury.)
Wow!!! The GOP counts on America's lack of short term memory, in order to roll out the same old shit they have always served up-- only now with gumption & shiny newness.


MSNBC describes it as "The new agenda is rife with grass-roots rhetoric". Uh huh....  here are the low highlights & the interpretation:


Jobs:
- Stop job-killing tax hikes   READ: TAX CUTS FOR THE RICH
- Allow small businesses to take a tax deduction equal to 20 percent of their income  READ: TAX CUTS FOR BUSINESS
- Require congressional approval for any new federal regulation that would add to the deficit
READ: DON'T WORRY THEY ALREADY HAVE LOOPHOLES IN THE WORKS
- Repeal small business mandates in the new health care law. READ: NO NEED TO INSURE THE PEASANTS
Cutting Spending:
- Repeal and Replace health care READ: LET THEM EAT ADVIL!
- Roll back non-discretionary spending to 2008 levels before TARP and stimulus (will save $100 billion in first year alone) READ: DON'T KNOW THE DETAILS, BUT I'M GUESSING IT INVOLVES LESS MONEY FOR EDUCATION, SENIORS & MEDICARE.
- Establish strict budget caps to limit federal spending going forward READ: ABOVE.
- Cancel all future TARP payments and reform Fannie Mae and Freddie Mac READ: NOW THEY WANT TO REFORM  FINANCIAL LENDERS, AFTER THE WHOLE SUB PRIME MORTGAGE MELTDOWN. NOTICE THEY AE NOT GOING AFTER WALL STREET- THOSE WHO DID THE MOST DAMAGE, BUT THE GOVERNMENT LOW INCOME LENDING PROGRAMS.
Reforming Congress:
- Will require that every bill have a citation of constitutional authority  READ: OH PLEASE!
- Give members at least 3 days to read bills before a vote READ: FRIDAY NIGHT NEWS DUMP
Defense:
- Provide resources to troops READ: MORE OF THE SAME OLD CRAP  & ENDLESS WARS
- Fund missile defense READ: WIPE THAT SLOBBER OFF YOUR FACE, WAR PROFITEERS
- Enforce sanctions in Iran READ: CIRCLING THE WAGONS FOR THE NEXT WAR


Oh! Get this-- of the 21 pages, 14 of them are full page photos. The book has one sided pages- so if you took out 14 pages of pictures, made the remaining 7 pages two sided the GOP plan would be 3.5 pages!
But I guess the GOP is already creating jobs by adding fluff- wasting more paper & adding  photos for those who prefer pictures of a cowboy, lady liberty & John Boehner.
The pledge does not cut pork spending & earmarks, so rest easy all you billionaires, all your favorite pork is still being served, only now with more rhetoric & rolled up sleeves!


We all know who the GOP is pledging to.... Corporate America & the wealthy.  I can see how they shied away from the title TAX BREAKS FOR BILLIONAIRES, for their booklet ~ a little too much truth for the masses. 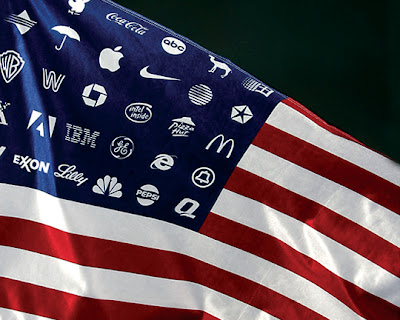 it's like the old joke with fortune cookies--you read the fortune, and then you add 'in bed' at the end. same with rethugs. if they say anything positive at all, you add 'for rich people only' at the end.

yup, america must be feeling the need to be screwed (as you so elegantly put it), because we are bending over backwards like a nimble gymnast to let these guys in!

note: Boehner rolls up his sleeves while the guy in back of him bites his tongue ... prepping for a big time old fashioned people hump?

re: tax cuts for the bitch, ummm, rich ... I recall GWB said tax cuts for them are necessary because if we don't give them an attractive tax rate, they will just hire more and better accountants to reduce their taxes! jeez, what a blabbermouth ... he actually told us the wealthy would rather pay beaucoup bucks for some creative accounting than an extra 3% in taxes! And yet, they have the nerve to scream "class war" when the tables are turned ... and yet again, I am only mildly surprised that americans are so willing to turn the other cheek, or in this case, bend over and spread 'em once again.