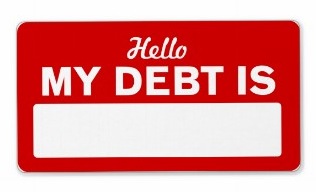 Kudos to those wonderful people of the Backbone Campaign. They love street theater & what better place to bring it-- your own College Commencement ceremony!
They are trying to bring awareness about student debt to the forefront, using "Creative Commencement" tactics.
Congress just voted to double the student loan debt to 7% & the existing student loan debt just hit the $1,000,000,000,000 mark (that's one trillion).
Leave it to the 1%er GOP in Congress to decide now is a good time to shackle students with a double debt load, at a time when so many can't afford to go to college at all.
It's a known fact college grads make more money than High School grads & ultimately contribute more to the tax base in the long run.

That being said here are the supplies the Occupy Graduation movement have to offer:

The lovely "Hello MY DEBT IS" name sticker, shown above.

And the inflatable ball & chain debt shackle, one can personalize it by painting in white YOUR college loan debt 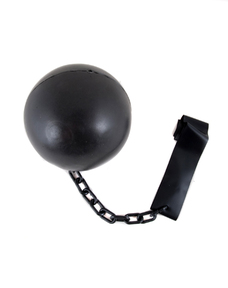 Only 55.3% of Americans between the ages of 18 and 29 were employed last year.  That was the lowest level that we have seen since World War II. 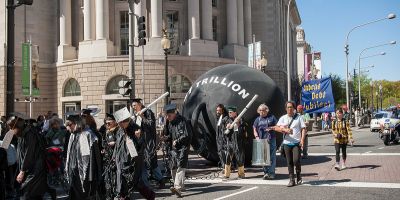 All student loan debt should be forgiven by the Federal government.

But alas, Obama would be called a commie, socialist, Marxist, Kenyan, nigger, by the true enemies of America like McConnell, Cantor, and the GOP nominee, Mitt Romney, and Dear Leader is afraid of being on the receiving end of such epithets.

Very afraid, always afraid. A leader of this country these days MUST be afraid! Not of its citizens, but of those who choose to run him, choose to have him win the election, choose to serve them. And god forbid he choose not to!

Setting up barriers to education is really a bad move. You are right... Education is "socialist".

I love the Backbone campaign's concepts.

Obama did make the bold move to pull the student loan monies out of the bank/lenders hands, as they figured out predatory practices (no big surprise there!).

But the GOP would not protect the lower interest rate 3.5% on student loans, instead wanted the $ to come for the health care budget.

Typical GOP mindset: Choose one: Health care OR higher education, you can't have both!