Historic relic for the Smithsonian 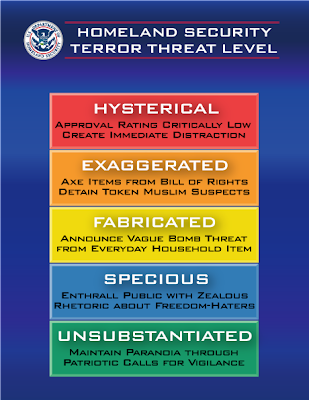 I've always dreaded it, and I was happy to see a story in today's paper saying the Obama administration is looking at getting rid of the Homeland Security Color Coded Terrorism chart.
The thing that remains embedded in my memory is traveling through the airport, post 9-11. After a heavy & shoeless search at the metal detector check in point, (mine was extended, because I have a Titanium knee, so I always set off the alarm, and get sent to Area B - to assume the daVinci pose & have a TSA agent frisk me & use the hand held wand.  After passing this stringent test, you could proceed into the inner sanctum of the real airport zone. There, you'd hear a prerecorded message being broadcast throughout the airport. Don't leave your bags unattended & a brief announcement about what Homeland Security color code the *Terror Threat o' the day* was.
I remember being in the restroom, beginning to hear the message, but then it was drowned out over the sound of flushing toilets.
I'd reconciled there & then, the sound of flushing toilets was equally effective. We would get these vague "remain vigilant" advisories, that were in fact too vague to be meaningful.
At least when you flushed the toilet, something happened. There were tangible results!
I think it was the Michael Moore movie, where a speaker did a segment reiterating this same theme- that the color would NEVER be announced as blue or green, because we were being programmed to *live in fear*.
Bloomberg: "The five-color coding system, created after the Sept. 11 attacks, goes from green, signaling a low threat of attack, to red, signaling a severe threat. Since its introduction in March 2002, the level has been changed 16 times but remained most of the time at mid-level yellow (elevated) or orange (high), the statement said.

The threat level has never been lowered to blue (guarded) or green. It was elevated to red only once, on Aug. 10, 2002, for flights to the U.S. from the U.K. after British police said they foiled a plot to blow up aircraft bound for the U.S., the department said. The alert level was lowered to orange six days later."

I bet if you asked 10 different people what colors are on the chart & what they mean... most would not know.... I don't know,  because I always thought is was a bogus tap dance to keep us afraid & to pretend like they were doing something to prevent terrorism.

So thumbs up to the Obama administration for the initiative to scrap this useless relic, let the Smithsonian add it to the museum collection of worthless Bush paraphernalia.

It would be more amusing, and just as productive to recreate the robot from the Lost in Space show, to deliver WARNINGS! to us. Don't get me wrong, I don't think terrorism is a joke, just that the terrorism color coded chart is & was a joke.

the color coded chart was ridiculous. it was just another way to stir up fear. it was a waste of time and money, just like the emergency broadcast system. how many years has it been around? how many times has it almost given me a heart attack when it starts blaring in the middle of the night when i'm watching tv. it's never a real emergency, it's always the damned test. it wasn't used during 9-11, so what exactly are they saving it for?

Ha! You are right about the emergency broadcast system. Although they have used it for severe weather warnings, locally. 99% of the time it's just *nothin*....

But the fact the color code never did drop to the mellow tones of blue & green shows what a bogus & manipulative ploy it is.

That color chart is just another Bush Legacy that should've been laughed out of existence years ago. It created a true "boy who cried wolf" scenario ... we all got so used to the threat level being so high, we weren't about to take a threat seriously anyway.

for the record, what exactly is the "davinci pose"? obviously I have not flown much since 911.

ps, DANGER DANGER WILL ROBINSON! cracked me up! I LOVED "Lost in Space"!

That is the pencil drawing with the person standing straight up both legs spread apart & the arms outreached above.

They run a hand held wand & do the pat down. at the same time.

Here is a link to the daVinci sketch
Vitruvian man

As for the Robot--- it would have been more amusing than the color coded chart.

Whats weird about metal detectors is only a time or 2 did I NOT set off the alarm - which makes me realize I know when their equipment is not working right!

aaaah (slapping my head), I know that famous drawing, of corzzzz!!!!

hey maybe the time you weren't daVinci'd at the airport was when the threat levels had been secretly lowered to blue or green, which was never revealed to the public cuz we need our fear manipulated by professionals (like cheney).

I thought you'd say Oh yea.... I remember that famous sketch. Having to spread out like that reminded me of that sketch...

Now back to our regularly scheduled fear...