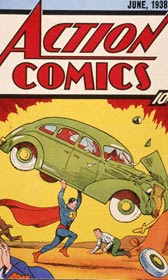 This is great feel good story~ we all need one every now & again.

"Asylum reports that a family was packing up their belongings after their bank had started foreclosure proceedings, when they came across a box of comic books in the basement.
But this wasn't just any box, and the family suspected they'd struck gold when they discovered among the titles "Action Comics No. 1," the comic that introduced Superman to the world and brought to life the superhero genre, which remains popular to this day.
In the nick of time, the Man of Steel saved a family's home ... for real. A couple facing foreclosure found the collateral they desperately needed with the discovery of an Action Comics #1 (aka, the Holy Grail of comic books) in their basement. As any true fanboy knows, Action Comics #1 is the most significant comic of all time because it was Superman's debut. In fact, the issue birthed the entire genre of the superhero.
It also happens to be worth upward of $250,000. Asylum writes:

The house had been in the family's possession since the 1950s, which is probably when the wife's father stashed the issue in a box with some other, mere mortal titles. When the family contacted Stephen Fishler, the co-owner of ComicConnect and Metropolis, he was naturally skeptical after receiving countless similar calls, of which "99.9%" turn out to be reprints, he told Asylum. But then they texted him a cell phone picture of its cover, which features Superman holding a car, and Fishler knew he'd found the key to comic book fans' collections all over the world.
The comic is expected to fetch more than a quarter-million dollars when it goes up for auction on ComicConnect -- and that's a low estimate. In February of this year, an unrestored copy of "Action Comic No. 1" sold for $1 million, according to the Los Angeles Times, followed a month later by the sale of another copy in better condition at $1.5 million.
But don't go hunting down the family for what's left over after they get back up to speed on their mortgage. They told Fishler they'd like to remain anonymous, although they did tell Asylum that they were "shell-shocked about finding this book.":

"I know I am very fortunate, but I will be greatly relieved when this book finds a new home."Thankfully, it looks like they'll get to keep theirs.

Between my brother and I we had every Superman ever printed until my stepmother decided to clean out the attic and burned them all!!!
This is a feel good story! Thanks.

What a find! Good for these folks. A good example of how we don't really control anything. It's cosmic, (cosmic, comic, get it? pun intended, sick, eh?)

Jazzlover! Oh! Yours is the opposite of this story.
Damn! That collection must have been worth a bundle. Oh well it was not meant to be.
But how frustrating is that???

Spado~ What a strange fate-- I'm guessing the Dad who owned that copy may have since passed away, so it was his gift-- not only saved the house... but may allow them to go buy a different house & never have to do business with the foreclosure people again.

Just as easily someone could have dumped the box in the recycle pile.... so this is an amazing story.

We all need good news to keep us going.

dw jazz, i feel your pain. i had a huge comic book and mad magazine collection (not to mention baseball cards when mickey mantle and roger maris were still around), and my mom threw all of them away when i went to college. i'm such a packrat that it hurts all the way down to my soul to this day when i think about it.

On NO Nonnie! So sorry that happened. Bummer to not only lose those things you collected, but know now they had become so valuable.
Ugh!

Let these be words of wisdom to any Mother/Stepmother out there on a cleaning jag-- what you think is "junk" might be treasure.
Careful of what you get rid of!