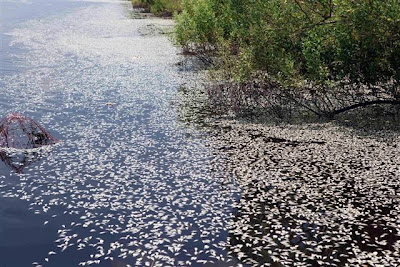 BP has capped the well & now all is well? Not exactly. The above photo is a massive fish kill.
Locals waiting for claims $, and doing more waiting than "claiming", and many folks are out of work.
These are the current reported numbers from the Fish & Wildlife Dept:
Dead Birds - 3117
Dead Sea Turtles - 498
For as much rhetoric as was tossed about re the crude spill- even the "keeping the boot on the throat" of BP, look where we are at today. The cameras have gone blank- apparently we don't need to see what is going on in the murky, deep waters. Is there seepage? What are the pressure readings? Apparently they think we don't need to know. I'm reading reports BP will be taking a $10 BILLION tax write off.
They created the worst environmental spill in US history, and can use it as a major tax write off?
That is a sweet deal for them, Eh?  Not like the U.S. could use $10 billion- oh wait! We are $13.3 trillion in debt.
BP intends to ship nearly $10 billion of the costs related to the Gulf oil spill to the backs of the American taxpayers.” Last year BP paid $10.5 billion in taxes worldwide.
What BP is doing is perfectly legal. BP can’t write off any fines or penalties assessed by the government, but the $20 billion BP set aside in an escrow fund plus additional costs of containing the spill are all fair game.
In a statement to CNN, BP’s spokesman said, “BP is folling the U.S. Tax Code with respect to the income tax treatment of costs associated with the MC 252 incident. Taxes are paid on profits and the Gulf of Mexico spill response costs have reduced BP’s U.S. profits—so it follows that our tax obligations will be lower as well.”
I am not satisfied with the current situation. Roll the cameras. Make public the well cap pressure numbers. Do not allow them to find & exploit tax loopholes.
If the damaged well is seeping, we need to know about it. If they are still releasing dispersant, we need to know about it.  Also in the following video Thad Allen states this info (@ the 3:48 time in the video)
THEY BEGAN CAPTURING 26,000 BARRELS OF OIL PER DAY
THEY WERE ADDING A SECOND TANKER TO CAPTURE ADDITIONAL OIL,
REACHING THE 40 TO 53,000 BARREL PER DAY CAPACITY.
1 BARREL OF OIL = 42 GALLONS
53,000 BARRELS OF OIL = 2,226,000 GALLONS A DAY SPILLED
THE PORTLAND EXAMINER REPORTS:
US Attorney General Eric Holden has opened criminal and civil investigations into the BP oil spill.  Should BP be found guilty of a crime, any caps on their financial liability would no longer apply.
The clean water act of 1972 gives the US environmental Protection Agency the power to seek civil penalties for each barrel of oil that leaks into US waters.
Under normal circumstances the fine is $1,100 per barrel. However if BP is found guilty of gross negligence because they reportedly failed to repair the damaged  blow out preventer on the Deepwater Horizon, that penalty rises to $4,300 per barrel.
At the spill rate of 53,000 barrels a day beginning on April 20 when the Deepwater Horizon exploded, until the completion of relief wells in August, the fines from the EPA alone would be over $20.5 billion dollars.
EPA oil spill fines are well known throughout the industry, so BP had a great deal of motivation to underestimate their original figures on the amount of oil being spilled."
Let's keep these numbers fresh in our minds as we move forward, and remember this "boot on the throat of BP" concept. We don;t want the US to go soft on BP & back down with clouded memories of just how much oil spilled, the testimonies of those who knew for sure the blowout preventer was broken & BP ignored it- that's gross negligence if ever we witnessed it.

but...but they gots a new CEO and he's a good ole boy from down in them there parts, and they gots that little leak stopped. Why don't you give them a break--they only make billions of dollars per quarter each year, it's not as if they's rich or sumthin?
;~)

Lib~ Uh huh. Just turn off the cameras & get those in-house lawyers to find more loopholes!
Nothing to see here.... move along.....

i hope that the american people will remember what bp did and what they are going to get away with and drive past their stations. there are plenty of other stations to fill up at. i know that it will hurt the individual owners, but them's the breaks. let bp help them out. i might stop at a bp station to buy a soda or something like that, but i'll never buy their gas.

Nonnie ~ they do own Arco stations & AM/PM mini markets, as well as Casterol.

I choose to not do business with them at all.

Skanks! Looking for tax breaks to shift the burden on us!