Amtrak.... going back in time to yesteryear 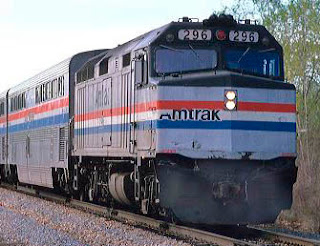 While air travelers endure radiation x ray scans, or up close & personal pat down gropes....
it's a whole 'nuther world on trains.
Come December 15, Amtrak passengers can bring guns onboard.

Whoah! I bet the train security people won't be demanding to "touch anyone's junk", when you have passengers who are allowed to travel with guns!
Those Amtrak employees will be sooo customer service oriented & accommodating!


So here's the deal~
ABC news reports: "Beginning December 15th, Amtrak passengers will be allowed to bring guns aboard some trains, including California routes. 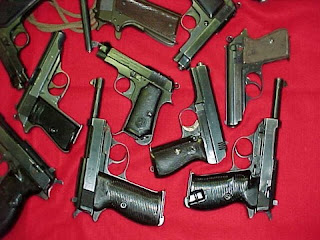 Gun rights advocates pushed for an order by Congress that allows passengers to bring guns on trains that have checked baggage service.
Passengers carrying guns must notify Amtrak 24 hours in advance.
The unloaded firearms must be packed in hard-sided containers and stowed in train storage lockers.
Rail cars are being retrofitted with weapons storage lockers."
Seriously? What idiots thought this would be a good idea?
You just know some gun toting yahoo will show up @ the train station... either forgot to notify 24 hours in advance (you going to argue with a gun carrying customer in person?)
Or worse- forgot that the gun IS loaded.
Suddenly Amtrak employees will become weapons experts, checking to make sure the arsenal of weaponry sure to show up at the train station,to  be brought onboard, is in fact unloaded?
Does this plan have disaster written all over it??
How long before there is some gunshot incident, either intentional or an accident?
I give it 2 months.
Seriously! Why does this idea make me think of wild west train robberies of yesteryear? 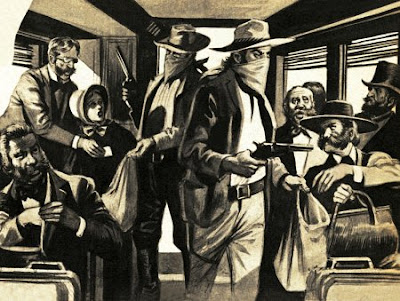 Labels: A bang up idea for train travel

Guns onboard Amtrak? Seriously, has travel in this nutcase nation come to this?

And not a peep from Dear Leader about it. He's too busy roaming the world after the terrible jobs report showing unemployment has reached 9.8% and real unemployment 17.1%.

Oh well. Maybe we'll get lucky next year and Dear Leader will be impeached? A boy can dream.

have gun, will travel ... don't leave home without it ... why next thing ya know people will be bringing their guns into church!

ps, ahh luv the old beatles and snowman pic ... takes me way back ... I think it was from the movie "Help"?

Reading this I recalled blogging a couple years ago about our German friends who went back home to visit. Upon return, I enjoyed hearing their comparisons of public transportation here versus there, i.e., in Wash.,DC, the buses had no gun symbols displayed while in Germany they were amused at bus signs there: no ice cream sign symbols! Maybe Amtrak can next work on getting out the sticky out now by replacing any no gun signs with Ice Cream Verboten!

(like your new blog background, Fran. reminds me of Oregon) ~Dada

The guns are supposed to be checked in, but once you open the gun door, well, shit happens.
Since there is no screening to get on a train, it is just a matter of time before the gunslinging adventures begin.

Dk ~ the wild wild rails... this could be a fun photoshop challenge - new slogans for Amtrak new & improved, WITH guns.

Dada ~ the ice cream mess will not be tolerated!
But you have to admit, this over the top body search TSA crapola re flights, and this kind of anything goes approach on trains.

Can ya bring rabid dogs onboard too?