You would think you were being punk'd to view this announcement. Must be some well done political satire, but no- this is for real, or unreal-- you decide!


Yes folks, if Homeland security is deeply in jeopardy-- Who you gonna call???
A Wal-Mart Manager???

Just to confirm how secure Wal-Mart is....
It has come to light that Wal-Mart tends to pay female employees less for the same job, and they tend to not promote Women as much as men.


Walmart received a boost this week when the US Supreme Court said it would hear the supermarket giant's attempt to block a massive sex discrimination class action lawsuit against it.
The claim, which is the largest sex-bias lawsuit in US corporate history, dates back to 2001. It was first filed by seven women, some of whom still work at Walmart, but it now covers up to 1.5 million former and current female employees.
The plaintiffs allege the practices of promoting men over women and paying them less for the same role across its 3,400 stores over the past decade were part of a common culture at Walmart. The retailer, which owns Asda in the UK, had appealed to the country's highest court in the summer over the lawsuit after a Californian appeals court gave it the green light in April.
The Supreme Court judges will not rule on whether Walmart is guilty of sex bias, but will decide if the grocer must defend itself against a single lawsuit that covers such a huge number of employees. If the case proceeds, it could cost Walmart $1bn or more in damages.
The Walmart Stores Inc v Dukes case is named after Betty Dukes, the lead plaintiff, who is a store greeter for Walmart. 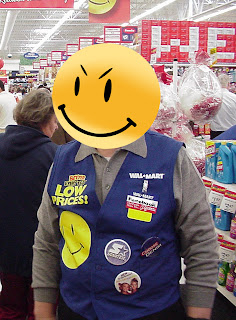 Prosecuting lawyers allege that the case is "large because Walmart is the nation's largest employer and manages its operations and employment practices in a highly uniform and centralised manner". But Walmart argues that this is unfair, saying that claims should focus more on locations or on an individual basis. Walmart said: "The current confusion in class action law is harmful for everyone – employers, employees, businesses of all types and sizes, and the civil justice system.
Keeping the USA safe from terrorists, while appealing their sex-bias discrimination lawsuit to the Supreme Court.
Just how low do they go?
Posted by Fran at 1:41 AM

So much for the company's attempt to rehabilitate its image.

Moral of the story: never work for anyone who makes you work in an ugly vest.

It's just the beginning.

a few years ago, i went to a 24-hour walmart. it was probably 10 or 11 at night. when i got out of my car, i noticed a van parked next to me filled to the brim with crap. i mean, all you could see when you looked in any window was crap all the way to the ceiling. i am not exaggerating. i had no idea how anyone could even get in the van, let alone drive it. the engine was on, and the whole scene was rather strange. i went into the store, and i told the security guys that they might want to call the cops, because something weird was going on. i was in the store for a couple of hours, and when i came out, there was the van. the engine was still running. i went back into the store and asked the security guys if they had even bothered to go outside and see the van. they said that it was probably nothing, so they didn't bother to look. i went back outside, and i called the cops. i didn't wait around to see what they did. so much for walmart being a good citizen looking out for our security.

as for their treatment of female managers--i knew one who sued walmart years ago for discrimination and won. they treat women like shit.

What a kick to see the poobah of Homeland security officially referring us to WalMart for security issues??
How low does it go?

Nonnie~ Great! WE can rest assured those Wal Mart managers & security will be the glue that holds this country together?
AS for the discrimination against women-- that is all documented for many years.
This could wind up being the biggest class action lawsuit in US history-- if Bush's Supreme court minions don;t squelch it.

If the Class Action suit by the women prevails, they would get a settlement & back pay.